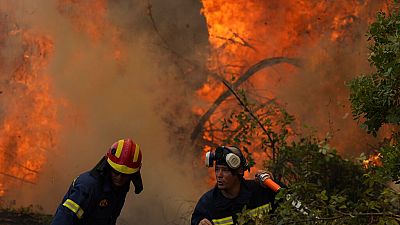 Criticism against the Greek government is growing as the country continues to battle raging wildfires that have forced thousands to flee.

Authorities on Evia, Greece's second-largest island, have in recent days denounced "insufficient" means to tackle the blazes when the situation was "critical".

The fires on Evia, some 200 kilometres away from Athens, have besieged village after village with about 2,600 residents and tourists forced to flee on boats in apocalyptic scenes.

According to the island's vice-governor, Giorgos Kelaïtzidis, at least 35,000 hectares and hundreds of houses have burned.

The villages of Kamatriades and Galatsades were to be the priority for firefighters on Monday.

“If the fire gets through there, it will be in a thick forest and difficult to extinguish," firefighters were quoted by ANA as saying.

"Have you seen the state offering us water? Snacks for the children? No one. They let shopkeepers and individuals give water to people," Giorgos, from Pefki, told AFP.

Louisa, a pensioner, stressed that "Here, people used to live from the forest, crops, olives and tourism. There is nothing left of this."

Greek Finance Minister Christos Staikouras announced on public broadcaster ERT TV that aid of up to €6,000 per household would be given to residents whose homes were damaged, as well as €4,500 for the injured.

He also announced that the civil protection budget would be boosted by €1.76 billion and €224 million would be allocated to reforestation.

It comes as workers battled through the night - when there is no air support - to prevent the fire from reaching the town of Istiaia, according to Greek news agency ANA.

Greek Deputy Civil Protection Minister Nikos Hardalias had said on Sunday that "another difficult night" would be experienced on the island.

Among the 500 firefighters deployed on the island are some 200 from Ukraine and Romania, reinforced by 17 water-bombing planes and helicopters, according to Greek firefighting services.

But the airborne resources are experiencing "serious difficulties" due to turbulence, thick smoke and limited visibility, Hardalias said on Sunday.

Greece has been experiencing a wave of violent fires for nearly two weeks, helped by drought and scorching temperatures, which have left two people dead and dozens injured in hospital.

On the outskirts of Athens, the fire that destroyed dozens of homes and businesses had been in remission since Sunday but "the danger of a resurgence is high," Hardalias warned.

A fire in Crete has been brought under control, while the situation has stabilised in the Peloponnese, authorities said.

More than 56,000 hectares have been burnt in the past ten days in Greece, according to the European Forest Fire Information System (EFFIS).

The European Commission announced on Sunday that more European firefighters and equipment will be deployed to Greece shortly.

So far nine planes and close to 1,000 firefighters and 200 vehicles from other EU member states had been sent to Greece.

EU assistance against wildfires has also been deployed to Italy, Albania, North Macedonia, and Turkey.

Greek PM apologises as fight against wildfire on Evia continues