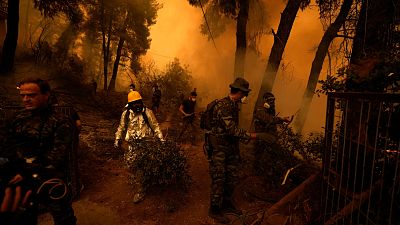 Fires of "biblical catastrophe" continue to burn through Greek forests, forcing the evacuations of thousands of people as a political storm brews in Turkey over the worst wildfires in recent history.

Three large wildfires churned across Greece on Saturday, with one threatening whole towns and cutting a line across Evia, the country's second-largest island, isolating its northern part.

Others engulfed forested mountainsides and skirted ancient sites, leaving behind a trail of destruction that one official described as “a biblical catastrophe.”

Firefighters fought through the night to save Istiaia, a town of 7,000 in northern Evia, as well as several villages, using bulldozers to open up clear paths in the thick forest.

Civil Protection chief Nikos Hardalias said on Sunday the Evia fire was burning on two fronts, one to the north and one to the south.

Fire brigade officials also announced that a water bomber plane crashed on Sunday afternoon while operating on the island of Zakynthos. The pilot was unharmed.

The Petzetel aircraft was extinguishing a small fire on the Ionian island, west of the Greek mainland, when it crashed for an undetermined reason, they said.

The other dangerous fires were one in Greece's southern Peloponnese peninsula, near Ancient Olympia and one in Fokida, in the Central Greece Region, north of Athens. The fire in Ancient Olympia moved east, away from the ancient site, threatening villages in a sudden flare-up Saturday afternoon.

At least two people, including a volunteer firefighter, have been died because of the wildfires.

Prime Minister Kyriakos Mitsotakis said on Saturday that securing aid for everyone affected by the wildfires will be "my first political priority."

“When this nightmarish summer has passed, we will turn all our attention to repairing the damage as fast as possible, and in restoring our natural environment again,” he said.

In Turkey, fires described as the worst in decades have swept through southern regions, killing eight people.

The top Turkish forestry official said 217 fires had been brought under control since July 28 in over half of the country’s provinces, but firefighters still worked Saturday to tame six fires in two provinces.

The wildfires have unleashed a political storm with the government of President Recep Tayyip Erdogan heavily criticised for its handling of the crisis and for rejecting several offers of outside assistance.

Erdogan has rejected the criticism and accused opponents of politicising the crisis. He has also condemned the use of the hashtag #HelpTurkey, seemingly outraged his country could use help.

"In response to this, there is only one thing to say: Strong Turkey," Erdogan said of the #HelpTurkey tweets, which he called "terror by lies propagated from America, Europe and some other places."

In the wake of this, the prosecutor's office said it would investigate whether the tweets were intended to "create anxiety, fear and panic among the population, and to humiliate the Turkish government".

At the same time, the media regulator threatened to fine TV stations that continued to broadcast live images of the blaze and publish articles "that generate fear and worry the population".

Most stations complied with the order, reducing their coverage of the fires that killed eight people and destroyed large areas of forest along the coast.

Turkish power plant 'at risk of being destroyed' by wildfires