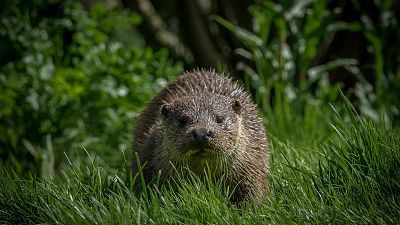 These elusive creatures are making a comeback in Europe but their future is still uncertain.   -   Copyright  Unsplash
By James Appleby  •  Updated: 09/08/2021

When I find otter expert Ross Lawford, he is watching a family of foxes. There are two cubs here and another pair downriver. Clouds of insects hang above the water, crucial to the food chain. Before the night is over, we’ll see badgers foraging by their sets.

Tawny owls turn their heads through 270 degrees to watch us pass. Edinburgh’s major river, the Water of Leith, is rich in wildlife.

There is another animal, however, that has become a superstar for wildlife watchers in the city and that is the otter. For decades, they were famous for their elusiveness but not anymore.

These animals have been spotted in the River Manzanares of Madrid, on the esplanades of Porto, and just outside Paris in the Seine. Our urban centres might be crowded but there’s enough space for a few more residents like these.

Watching otters in the capital

The first otters we see are fluffy toys, tucked into hoodies and peeking from rucksacks. A father and daughter have painted the charity’s Facebook name on a set of stones that they lay on the riverside.

Joanne, a key fundraiser, saw giant otters in Peru which were six feet long from nose to tail. Another man has only failed to see the city’s otters on two days this year. “It ruined my record,” he says.

But for all our mascots, we can’t make an otter appear. We stare at the river, wait, and then, out of nothing, Ross points to a bridge some two hundred metres away. Two otters, a mother and cub, have appeared in the shallows. Whether this is our first otter or our thousandth, there is a flood of excitement.

“How on earth did you see them, Ross?” He only shrugs, “I watch a lot of water.”

They are one of Ross’s favourite animals to watch and to raise money for his favourite species he has undertaken a 24-hour otter-watch along the rivers of the Scottish capital. So far it has raised more than €850 to help protect them.

The money will go to the International Otter Survival Fund. Based on Skye in Scotland’s Inner Hebrides, it is building a new hospital for injured and abandoned animals. The charity has rehabilitated more than two hundred otters and most are cubs that were separated from their mothers. With help from the fund, they have now been returned to Europe’s lakes and rivers.

Seeing a wild otter is no doubt a thrill, especially in the middle of a capital city, but the risks to these animals are also clear to us. The Water of Leith is in relatively good health but we see balloons caught in the trees and plastic floating downriver.

Fires are built along the bank, frightening animals from where they might feed. A minority of anglers want to remove otters from the UK list of protected species, though research shows that the presence of predators is a good indicator of large prey stocks.

Some city residents even feed otters illegally, damaging their health and habituating the animals to people. Despite recent gains across the UK, it’s no wonder that the Eurasian otter remains threatened.

And the story is the same across Europe: frightening declines in the twentieth century followed by a fightback in the twenty-first. The fur industry snatched otters from Europe’s rivers, pesticides like organochlorine decimated predator populations until they were banned in the late 1970s.

Otters in every mainland European country have since recovered, with a population rise of almost 55 per cent in the UK. The future looks good here, though it remains a critically endangered species in much of its Asian range.

The International Otter Survival Fund works in more than twenty European countries to make sure that this fightback stays strong. First, they take in abandoned cubs and nurse them back to health – unsurprisingly, most of the money raised by Ross will be spent on fish.

Their second role is to educate people, particularly children, about the importance of these creatures in their ecosystems. An otter means a healthy river, and a healthy river means a healthy environment. Although the increase of otters is a cause for celebration, this species breeds slowly and their small, helpless cubs are always vulnerable.

The International Union for the Conservation of Nature states that otters are “close to being at high risk of extinction in the near future”.

The International Union for the Conservation of Nature states that otters are “close to being at high risk of extinction in the near future”. Populations are decreasing and their habitats are fragmented, the organisations say. It’s a reminder that, without the necessary protection, these species could still disappear from our wilds and our cities.

At the 24-hour wildlife watch, it is clear that this is an animal that Ross truly cares for, and his enthusiasm spreads fast. Strangers listen to him talk and donate £40. A woman at a local cafe takes a leaflet – she’s seen otters on the coast and would love to chip in.

Ross and his group might be tired by the end of their marathon, but they’re full of stories like these about those keen to keep these elusive creatures in our rivers.

You can donate to Ross’s marathon wildlife watching efforts at his website to help build a hospital for these threatened creatures.