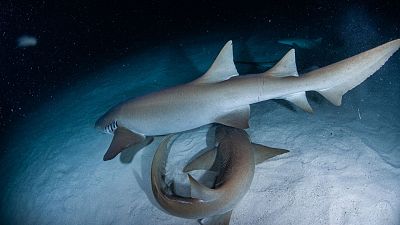 A series of secret shark mating rituals may have been discovered by researchers in Scotland.

A long running project by Naturescot and the University of Exeter saw cameras attached to Basking Sharks, with surprising results. Although previously assumed to be solitary animals, the cameras revealed sharks socialising on the sea bed and engaging in synchronised fin-touching and shooting to the surface. These are believed to be pre-mating rituals.

“Being fish they don’t have to be on the surface...they spend 88 per cent of their time on the sea bed,” explains PhD student Jessica Rudd who led the research.

“This was the first time we could see what they were doing. The shark's eye view helped us with a lot of insight. It was amazing, we saw a shark emerging from the dark right up to the surface, 70 metres in about 77 seconds.

The cameras revealed sharks socialising on the sea bed and engaging in synchronised fin-touching.

“It is a privilege to have this insight...to have a look at what is happening from that shark's perspective - it is something that you just don’t come across.”

How can the research help with marine conservation?

The researchers were able to see large aggregations of sharks off the Hebrides.

“Everybody went completely silent watching the footage, then everyone gasped, from seeing a single shark to seeing four to nine sharks there on the seabed. It was spectacular,” says Rudd.

It is believed that the sharks travel down the coast and into the mediterranean, returning to the area to feed and possibly to mate.

“It’s an opportunity to meet other sharks. Although we didn’t capture mating behaviour we saw pre-courtship displays.”

The mating behaviour theory is based on observations of other shark species mating practices.

The work, having been conducted since 2012, has contributed to the feeding area being made into a marine conservation zone, protecting the sharks feeding ground and potentially the reproduction of future generations.

“We are really excited by this research, and how the technology is continuing to contribute to our understanding of basking shark behaviour within the Sea of the Hebrides Marine Protected Area (MPA),” adds Dr Suz Henderson, NatureScot’s Marine Ecosystems Manager.

‘Citizen scientists’ of the animal kingdom

Technological advances have made it easier to conduct work like this with larger memory capacity, higher resolution and lighter cameras all making observation more sophisticated.

Basking sharks, which are the second largest fish in the world, are found across the globe. However, populations are vulnerable and in the north Atlantic (where the research takes place) they are endangered.

This is due to their previous value in oil production, they are illegal to hunt today but still are vulnerable to poaching for the fin trade or being caught in trawler nets.

The technology can be used in many ways and could turn marine creatures into ‘animal kingdom citizen scientists’, with the cameras used on a range of different species and albatrosses.

“We can use animals as these oceanographers, you can research the ocean in ways you couldn’t before, see the depths you can’t reach or go to parts of the arctic you can’t get to,” adds Rudd.

“Different species can help identify areas at risk in the oceans because of the way they use those waters, they can monitor them in ways humans don’t have capacity to do.”