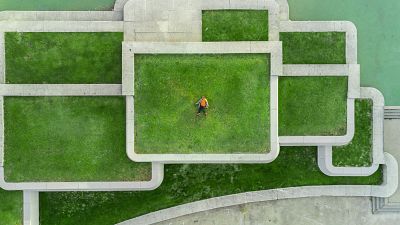 Rudi Scheuermann is the Global Building Envelope Designer at Arup. His focus is on a multidisciplinary design of sustainable and energy-efficient building envelopes. Here he gives us his take on why this architectural approach could reduce temperatures in cities.

With summer around the corner, many cities are preparing to battle increasingly hot temperatures and provide some respite to their citizens. Heatwaves make not only working, travelling and socialising difficult, and in some extreme cases even life-threatening, they are also an economic drain and put pressure on essential services like transport and health.

Now more than 970 cities are set to experience average summertime temperature highs of 35C by 2050, according to C40 Cities. And some cities are already appointing ‘chief heat officers’ to find ways of dealing with extreme temperatures.

Built up areas of cities, where tall buildings trap high temperatures in their surroundings, are particularly problematic due to the ‘heat islands’ they create. Rather than turning to air conditioning to solve this, which produces even more carbon emissions, there is a natural solution for reducing temperatures thanks to the power of plants.

But with the space for ‘green infrastructure’ like parks, gardens and trees limited in our cities, we must not forget about an important element of the built environment which can be part of the solution – buildings themselves.

The idea of a green facade or ‘living wall’ has gained momentum in recent years, in large part thanks to their aesthetic and often photogenic appearance. Too often, however, these green facades have been designed for beauty over function and have come to be seen as expensive and resource-heavy.

Far from architectural window dressing, the right kind of green walls can transform cities by reducing temperatures and improving air quality. To achieve these benefits, however, we must start to take living walls seriously.

City planners and building designers need to look past a simply aesthetic facade and choose the best, most efficient plants. We also cannot afford to wait for a new generation of expensive buildings with built-in green walls.

The real challenge is how to make the existing city fabric consisting of thousands of older, existing buildings more sustainable, through retrofitting clever and efficient systems.

What is the 20-20 rule and how could it change cities?

Most contemporary urban buildings’ exteriors are made up of thermal mass amongst which are materials like metal and glass, which absorb and store energy from the sun during the day before releasing it out into the city after dark.

When lots of these types of buildings are in close proximity to each other, they contribute to a microclimate that concentrates this heat, causing greater reliance on energy-hungry cooling and air conditioning systems. This leads to a situation where the temperature is artificially increased by 10-15 degrees above a building, causing a ‘heat island’ effect. These heat islands render areas increasingly unbearable when compounded with the temperature extremes produced by climate change.

Temperature is artificially increased by 10-15 degrees above a building, causing a ‘heat island’ effect.

All over the world, city leaders are beginning to realise that greening our cities is one of the most effective, practical and realistic ways of reversing these trends. It can greatly improve the liveability of our urban environment and help us meet our net zero goals.

This all starts with a simple piece of maths, something I call the 20 per cent rule.

If we grow plants on just 20 per cent of a building’s surface area, we will start to gain some immediate benefits at relatively low cost. The plants shade the building, lowering the need for cooling in the city and thus for the building, and also act with the substrate the plants grow on as a sound absorber, as well as cleaning the air of fine dust and particulates.

Green ‘envelopes’ (facades or roof spaces) also reduce the impact of stronger rainfall, a growing effect of climate change, resulting in less city flooding events. And it’s not just the environment that benefits from green walls, it’s also those living in cities. Being around greenery is proven to lower stress and has great mental health benefits, making our cities far more pleasant environments to inhabit.

If we apply this solution to 20 per cent of the buildings in an entire city, the effects could be transformative. At Arup, we modelled the benefits of the 20-20 approach (greening 20 per cent of a building’s ‘envelope’ in 20 per cent of an urban area) and the potential improvements were quite startling.

In London, we calculated that green envelopes would lower the air temperature by 3 degrees.

In London, we calculated that green envelopes would lower the air temperature by 3 degrees, a significant difference. We also found a 4-degree reduction in Berlin, 10 degrees in Melbourne and a huge 11-degree drop in the incredibly dense environment of Hong Kong.

Is this green vision practical?

Earlier generations of green envelopes have been criticised for being expensive or impractical to maintain. Fortunately, the design of these envelopes has matured and evolved. At Arup, our approach to green facades follows a few simple principles.

The systems we have prototyped, and which are currently on show at the “Greening the City” exhibition at the Deutsche Architektur Museum in Frankfurt, are an intentionally affordable solution. By producing an extensive elevation system for plants, these systems will to a large extent eliminate costs for irrigation, fertilisation and drainage.

This simple and effective approach to greening and cooling our cities will make our cities nicer, cleaner places to live while playing an important role in the battle against climate change.

City leaders have a valuable role in making this a reality and pioneers in Melbourne, Stuttgart and Frankfurt are already exploring making a proportion of green envelopes a requirement in their cities.

Ultimately, we cannot rely on new technologies of the future to tackle the climate emergency. Greening our cities is a powerful reminder that if we learn from nature, we can develop efficient energy-neutral solutions, improve the urban experience and fight against climate change – all at once.