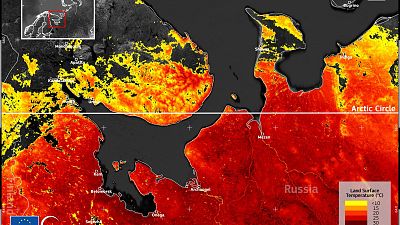 Western Europe is experiencing a colder and wetter than normal spring. So is much of North America.

This meteorological depression might make the very real spectre of global warming fade from view, but look north and you will see it's very much in operation.

Some parts of the Arctic are recording record springtime temperatures. The Barents Sea reached 27°C on Thursday 13 May. Areas between the Volga and Ural Mountains broke a few records for the season over the weekend, according to French meteorologist Etienne Kapikian.

Meanwhile, Siberia is seeing the first forest fires of 2021.

It is believed that some have simply not been extinguished since last summer, have continued to smoulder and are rekindled with the arrival of milder temperatures and drier weather, the so-called zombie fires, happening mainly in frozen peatlands.

Still, it is too early to declare a heatwave in western Russia, nor have records been broken. Speaking to Euronews, Meteorologist Scott Duncan reminds us that it is not unusual for parts of Finland and Russia to be subject to huge temperature differences. It should be noted that the region has also experienced an exceptionally cold winter.

However, Russian authorities have already warned the population about the extreme heat expected over the next few days (it could reach 30°C in Moscow) and point out that such temperatures have not been seen in the first half of May for a long time. The head of the Russian Meteorological Agency Roman Vilfand forecasts scorching temperatures in the northern hemisphere between May and July.

In short, it is too early to attribute this situation to climate change, but the trend in recent years is unmistakable. And one of the most widely accepted theories about the effects of climate change is a trend towards extremes, both of cold, such as last winter, and of heat.

After the last few years, marked by extremely warm weather in Siberia and north central Russia and with an unprecedented number of wildfires even within the Arctic Circle, the scientific community is looking very closely at what is happening in the region.

Early and intense wildfires, while not alarming... yet?

Mark Parrington, senior scientist at the European Copernicus network's Atmospheric Monitoring Service, reminds us that it is still too early to assess the season, but emissions from the fires in the regions sourrounding the cities of Omsk and Tyumen are well above the average of recent years, although they have not broken the record.

The graph shows, in red, the daily radiation emitted by the Omsk and Tyumen fires in 2021. In grey, the usual average since 2003 is shown. Below, in black, is the estimated annual carbon emissions from the fires in these regions between 1 April and 12 May. Although high, they were worse in previous years.

For Russia as a whole so far there have been fewer wildfires than average since 2003.

Fire risk monitoring systems indicate very favourable fire conditions in much of western Russia and Central Asia. And also in the areas of Siberia where the most significant fires have broken out.

The tweets published by the European Commission's Directorate-General for Defence Industry and Space on the fires in Omsk and Tyumen, sparked a heated debate among experts.

Some point out that globally, wildfires have decreased in recent years. Others counter that it is not the volume that is significant, but where they are occurring. Sometimes in the middle of the Arctic Circle. The thread also discusses the origin - natural or arson - of the fires.

The conclusion is, invariably, that although lightning fires do occur in high latitudes, humans are primarily responsible.

Record heatwave linked to deaths in western Canada and US Northwest