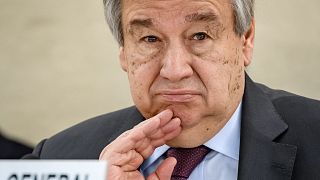 The world is running out of time to tackle the climate crisis, according to the latest findings by the UN.

The State of the Global Climate 2020 report by the UN's World Meteorological Organisation, released on Monday, shows last year was one of the hottest on record.

Greenhouse gas concentrations have increased despite the pandemic-related economic slowdown.

UN Secretary-General António Guterres warns that 2021 must be the year of action for protecting people against the "disastrous" effects of climate change, at a press conference presenting the details of the report in New York. He said current climate ambition levels were way short of what was needed.

"Time is fast running out to meet the goals of the Paris Agreement. We need to do more, and faster, now."

The standards set in the 2015 Paris Agreement are aimed to cap global warming at well below two degrees Celsius, above pre-industrial levels, with countries aiming to limit the increase to 1.5 C.

To reach this goal, it is essential that we reduce global greenhouse gas emissions by 45 per cent by 2030 and reach net-zero emissions by 2050. Although, another report from the International Energy Agency has shown that demand for all fossil fuels is set to grow significantly in 2021.

Coal demand alone is projected to increase by 60 per cent more than all renewables combined.

2020 was among the warmest years on record, but temperatures are only one aspect of the climate crisis.
Sea level rise continues.
Drought, heat, floods & wildfires affect countries around the world.

More on the urgent need for #ClimateAction from @WMO: https://t.co/jvYHpjOQaupic.twitter.com/56XNgOlLNR

Some of the most alarming findings include the fact that temperatures reached 38 C at Verkhoyansk in Russia on June 20, the highest recorded temperature anywhere north of the Arctic Circle.

The report said the sea-level rise trend was accelerating, while ocean heat storage and acidification is increasing, diminishing the ocean's capacity to moderate climate change. It added that the Arctic minimum sea-ice extent in September 2020 was the second-lowest on record.

The United Nations report came just days ahead of a crucial US-convened summit. Forty world leaders have been invited to attend US President Joe Biden's virtual talks aimed at galvanising efforts by the major economies to tackle the climate crisis.

Click on the video above to learn more about the report.

Record heatwave linked to deaths in western Canada and US Northwest