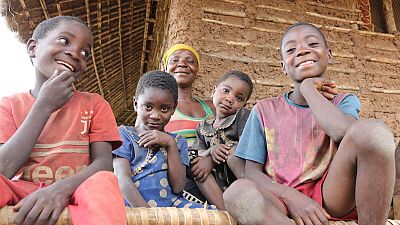 Filomena (central) with her children Felicio, Admira, Ergilia and Baptista outside their home in Cabo Delgado, Mozambique.   -   Copyright  Save the Children
By Marthe de Ferrer  •  Updated: 21/04/2021

Climate change is putting the lives of more than 700 million children at high risk, warns a major international NGO.

Save the Children released a report this week outlining how 710 million children live in the 45 countries at the highest risk of suffering the consequences of climate change. The charity cautions that these children and their families face a lifetime of extreme weather events like floods, droughts and hurricanes.

The result of these climate change-led disasters is a potential future of water scarcity, rising sea levels, diseases or any combination of these factors. One of the biggest concerns is how these repercussions will affect food production, as local food scarcity will lead to price hikes that disproportionately impact the poorest households.

Save the Children warned that immediate and drastic action needs to be taken in order to secure the lives of those on the frontlines of the climate crisis. Unless appropriate measures are put in place the situation will only worsen for children in the decades to come.

“The climate crisis is the largest threat to children and the realisation of their rights across borders and generations,” says Inger Ashing, CEO of Save the Children International.

“The COVID-19 outbreak has already pushed millions of children and families into poverty and increased hunger and malnutrition,” she adds, “but flooding, hurricanes and droughts are also causing children to be malnourished.”

‘Children will pay the highest price’

While there are already millions of people living on the frontlines of the climate crisis, as the situation continues the impact on communities is worsening exponentially.

The gaps between natural disasters and climate shocks are decreasing, meaning people have less time to recover. Each time a disaster strikes, frontline communities are less prepared and more vulnerable.

This is the case for 14-year-old Baptista and his three siblings in Mozambique. Since Cyclone Kenneth struck their town in 2019, the family have struggled to recover.

“What I really can't forget is that I saw many houses falling because of too much rain and strong winds. I got scared,” says Baptista, “I don't know why all that rain fell and there was a gale wind. I didn't like that because afterwards we were left homeless and without food.”

Ashing emphasises that children like Baptista and his siblings are the real victims of the climate crisis, despite having no part in causing the problems.

“Children have contributed the least to the crisis we are facing, but will pay the highest price,” says Ashing. This is why Save the Children is now urging governments to acknowledge the disproportionate impact this crisis is having on children in frontline communities.

The NGO has released a series of actions for governments to address, asking world leaders to:

Harnessing the power of young people

While children have undoubtedly contributed the least to the climate crisis, there are already initiatives around the world which place them at the centre of environmental solutions.

The Austria-based NGO SOS Children’s Villages is currently running a programme in Eteya, Ethiopia where young people are learning techniques and cultivation methods to adapt to the changing climate.

The rural area in southeastern Ethiopia is dependent on the climate for food security. Low rainfall coupled with deforestation and widespread monoculture (the growing of single crops) is contributing to an increasingly precarious situation.

“If the climate is good, we are fine too. If the climate is bad, the plants die and we will starve,” says 16-year-old Tadelech, who already identifies the connection between the environment and her community’s future.

Tadelech is part of the climate protection project run by SOS Children’s Villages. The scheme is managed by local people like local school principal Kedir Abdo Ketebo, who believes that educating young people about climate change and new agricultural techniques is the key to helping the community adapt.

“I see how much the farmers suffer,” says Ketebo. “The depleted soil brings less and less income and the families are becoming increasingly impoverished.”

But what young people like Tadelech are learning through the programme, about cultivation methods and irrigation techniques. They are then passing these on to their parents and the wider community in the village.

It’s not just programmatic work like this example in Ethiopia, however, where children are increasingly finding themselves central to climate action.

“We have seen the power of children, leading the way on climate change through a truly global movement,” explains Ashling. “But much more must be done – children need to be listened to and governments take action on what children tell them.

“Governments need to set up child-friendly mechanisms and platforms on- and off-line to include children’s recommendations in climate policies, including the most vulnerable children.”

Can we solve world hunger and climate change at the same time?

‘Women are a powerful force’ to fight climate change, says the UN