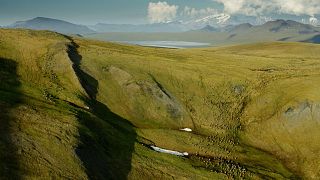 With a flick of his pen, President Biden put in question the plans of oil drilling in the Arctic National Wildlife Refuge (ANWR).

As soon as Joe Biden took office he signed several executive orders, including a temporary moratorium on oil and gas drilling leases. This halts the exploration of approximately 1,780 square kilometres of the refuge. Conservationists are hoping that a temporary moratorium will be followed by a permanent ban.

Largest protected wilderness in the US

The Arctic National Wildlife Refuge (ANWR), located in the northeast corner of Alaska, is the largest national wildlife refuge in the country. It stretches over 78,000 square kilometres, the size of South Carolina. President Dwight D. Eisenhower created it in 1960.

This is one of the largest protected ecosystems in the world. It is home to a huge range of wildlife. The reserve is also a critical area for the Porcupine caribou as well as female polar bears who build their dens and give birth on the Arctic Refuge’s Coastal Plain, exactly where the drilling was about to take off.

The question of whether to drill for oil in the territory has been an ongoing political debate since 1977.

The Trump administration seemed to put an end to it in 2017 when they changed federal law. This meant that previously protected land was opened up for new oil and gas leases. The auction to sell these was held in January 2021, two weeks before Donald Trump left the White House.

"They were rushing to do that because they knew that if leases are held it's much more complicated for us to ensure that the incredible wildlife wilderness values are protected and the interests of the Indigenous people are safeguarded as well," says Adam Kolton, executive director of the Alaska Wilderness League.

Republican politicians, including the governor of Alaska, were expecting billions of dollars from the auction, as well as jobs creation. Conversely, major oil companies took a pass on the controversial lease sale and the state was almost the only buyer. The total income of the auction turned out to be $14 million (€ 11,5 million).

Bring billions of dollars of investment to our state, support American energy independence, and provide critical revenues to our state and local communities. Alaskans have waited two generations for this moment; I stand with them in support of this day.#akgov#akoil#Alaska

What will it take to undo the damage?

Conservation groups, as well as Indigenous tribes, went to court to challenge the environmental review process that led to the lease sale. "If we're successful, and we believe we will be, these leases could be invalidated" adds Kolton.

In the meantime, the executive order signed by President Biden authorises his Interior Secretary to review the leases and the environmental impact of the drilling.

Protecting the Refuge was among the Joe Biden's campaign promises. He nominated Congresswoman Deb Haaland to be the steward of federal lands and resources as the first Native American Interior Secretary. She is facing fierce opposition in the lead up to the Senate hearing to confirm her nomination, largely because of her vocal opposition to oil and gas exploration.

Once confirmed, conservationists trust she will find a legal way to cancel the leases. Adam Kolton hopes for more. "There may be an opportunity for the administration to take steps to cancel those leases, or otherwise work to redo the environmental reviews, and put in much stronger levels of protection. So that if there ever is an administration, again, that wants to proceed, they would find that the cost of drilling would be even higher, because trying to comply with the new measures that could be put in place would be much more strict."

Click on the video above to learn more about this story.