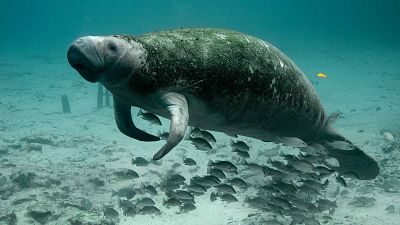 US wildlife officials are investigating reports of a manatee found with the word ‘Trump’ etched into its back in a river in Florida.

The aquatic mammal appears to have been mutilated, but the U.S. Fish and Wildlife Service (USFWS) are yet to locate the perpetrators. Harassing a manatee is a federal crime punishable with a $50,000 (€41,000) fine and up to one year in prison.

According to the USFWS, the US president’s name is only written in algae on the animal’s back, but environmental groups beg to differ. Nonprofit organisation Defenders of Wildlife argues that the word was “carved in the manatee’s flesh”, calling the incident “beyond cruel and inhumane”.

“One can only assume that this act of mutilation was politically motivated.”

The manatee was found in the Homosassa River in Citrus County, 80 miles (129 km) north of Tampa. Wildlife officials are looking for any information regarding the animal’s harassment.

The Center for Biological Diversity, a nonprofit group that protects endangered animals, is offering a $5,000 reward for information leading to a conviction in the case.

Here is the video of the poor manatee that had "TRUMP" carved into its body.

Minding it's own business and some monster(s) came along and did this.

If you have information on the person(s) who committed this federal crime please call 888-404-3922 https://t.co/maOImIxQS0pic.twitter.com/Yx2qaGhFXe

Manatees play an important role in maintaining a robust ecosystem. They eat a lot of sea grass which keeps it short, contributing towards the health of the grass beds.

“A healthy ocean depends on manatees. And manatees need our help,” states Ocean Today on its website.

According to National Geographic, manatees are at risk after a decline in numbers over the last century. They are vulnerable to hunters seeking their hides, oil, and bones.

Donald Trump impeachment: What happens next?