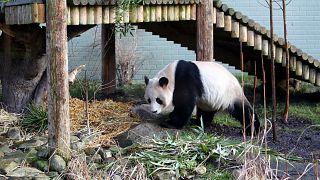 Edinburgh Zoo may have to return its giant pandas to China after facing losses of €2.2 million from lockdown closures last summer.

The panda pair were loaned to the Scottish zoo as part of a 10 year deal with the Chinese government, set to end in December 2021.

While it is too early to say what will happen when the contract ends, the Royal Zoological Society of Scotland (RZSS) says it is now having to “seriously consider every potential saving”. Currently, it costs around €1 million a year to lease a mating pair of giant pandas from China.

Savings may include “assessing our giant panda contract and the cost of their daily care,” explains David Field, chief executive of RZSS.

“Yang Guang and Tian Tian have made a tremendous impression on our visitors over the last nine years, helping millions of people connect to nature and inspiring them to take an interest in wildlife conservation,” Field adds.

“I would love for them to be able to stay for a few more years with us and that is certainly my current aim.”

Unfortunately, COVID-19 closures have had a “huge financial impact” on the zoo, which receives most of its income from visitors. Lockdown measures in Scotland meant that it had to remain closed for three months during summer.

“Although our parks are open again, we lost around £2 million (€2.2m) last year and it seems certain that restrictions, social distancing and limits on our visitor numbers will continue for some time which will also reduce our income.”

With limits on visitor numbers and lockdowns likely to continue, the zoo is facing a funding shortfall that could have a major impact on all of its projects. That includes those helping to save species closer to home.

The RZSS is a leading partner in the Saving Wildcats project which hopes to secure a future for the critically endangered Scottish wildcat. These rare mammals are on the brink of extinction following habitat loss and increased breeding with domestic cats. There are only an estimated 100-300 individuals left in the wild, according to Scottish Wildcat Action.

In the past, the breeding project has received funding from the European Union but after the UK’s exit at the end of 2020, it is no longer eligible to apply. The charity cannot apply for a British government fund intended to help smaller animal organisations either.

“It may be that some of our incredibly important conservation projects, including a vital lifeline for Scotland's wildcats, may have to be deferred, postponed or even stopped,” says Field.

He adds that the charity is “incredibly grateful” for all the support received from members and animal lovers so far, which has helped to keep the doors open at Edinburgh Zoo during the pandemic.