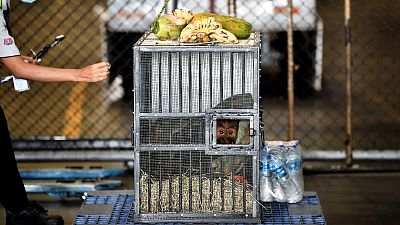 A Sumatran orangutan sits in a cage before being repatriated from Thailand to Indonesia.   -   Copyright  LILLIAN SUWANRUMPHA/AFP or licensors
By Rosie Frost  with AFP  •  Updated: 17/12/2020

A pair of Sumatran orangutans are flying home to Indonesia today after being smuggled into Thailand by wildlife traffickers when they were babies.

Ung Aing and Natalee were brought into the country three years ago and have been living at a rescue centre in Ratchaburi province.

The apes were found after police were tipped off about a vehicle crossing into Thailand from Malaysia. They were rescued alongside 51 turtles and tortoises, as well as six racoons which were also being trafficked.

On Thursday the two orangutans were put on a flight back to Indonesia where they will be rehabilitated before returning to the wild. Before they set off on the plane, they were fed electrolytes and snacks through the doors of their crates.

How does poaching harm orangutans?

Sumatran orangutans are critically endangered and fewer than 15,000 of them are thought to remain in the wild. Widespread destruction of their rainforest habitat, as a result of logging, mining and palm oil production, has pushed the Sumatran orangutan to the brink of extinction.

Illegal poaching of the species is another of the biggest factors affecting their declining numbers. Fragmented populations split up by roads and plantations make easy targets for traffickers, according to the Sumatran Orangutan Society. Poachers often capture orangutans to sell them on as pets and police say Ung Aing and Natalee were intended to be sold on to the tourism industry.

“The repatriation of orangutans is very significant to the Thai-Indonesian relations,” Prakit Vongsrivattanakul, deputy director general for the Thai Department of National Parks and Wildlife told AFP.

He added that since 2006, 69 orangutans confiscated by the Thai authorities have been repatriated to Indonesia. Dwindling populations of the critically endangered species have since been bolstered as many return to the wild.