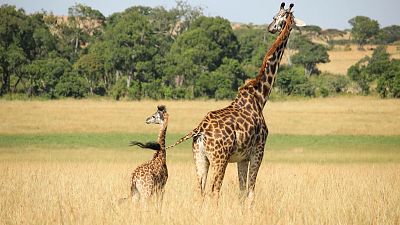 Giraffe populations have declined by around 40 per cent since 1985, with fewer than 100,000 adults left in the wild.

It has been called a “silent extinction” by experts as the drop in numbers has gone largely unnoticed. Now a number of environmental groups are calling on one of the world’s biggest importers of giraffes to ban them from being traded.

Habitat loss, civil unrest in the areas where they live and poaching are some of the driving factors behind the decline in giraffe populations. International trade in bone carvings, skins and trophies from hunting, however, is also a problem. Until last year, no international regulations existed to monitor the trade of giraffes.

The US is one of the world’s biggest importers of giraffe parts and on average more than one giraffe hunting trophy is brought into the country every day. Many imported parts are turned into decorative items such as bible covers, shoes, or jackets.

“The United States has an important role to play in preventing extinction of these magnificent creatures, as the top importer of giraffe trophies, and as many Americans import giraffe parts -including bones and skins - to sell them for commercial purposes in the U.S.,” said Adam Peyman, wildlife programmes director for Human Society International (HSI).

HSI is part of a coalition of conservation and animal protection groups that are planning legal action against the Trump administration to speed up protections for giraffes.

“Giraffes are loved by people around the world, so it’s shocking and sad that the US government is ignoring their tragic plight.”

They are hoping the legal action will force the US to act to prevent further decimation of the species by adding it to the Endangered Species Act.

A campaign has also been launched by charity Kids Against Animal Poaching (KAAP) called Stand Tall for Giraffes.

Founder 18-year-old Emily Walker launched a viral letter-writing initiative after reading about declining giraffe populations in The Independent’s Stop The Illegal Wildlife Trade campaign. KAAP is being supported by a partnership with the UK newspaper and international conservation charity, Space for Giants.

The group is encouraging people to write letters to US Secretary of the Interior, David Bernhardt, calling for a ban on the import of giraffe parts and to share the plight of these endangered creatures on social media.

#StandTallForGiraffes has reached more than 4.2m people since its launch last week and received backing from celebrities including Breaking Bad actor Aaron Paul.

Animal welfare activist and wife of US Treasury Secretary, Louise Linton, also leant her support to the campaign in a post on Instagram directly appealing to Bernhardt.