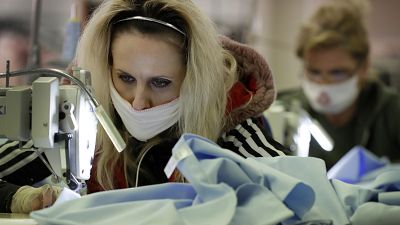 Millions of garment workers world-wide have not been paid their full wages during the COVID-19 pandemic.   -   Copyright  Kirsty Wigglesworth/Copyright 2020 The Associated Press. All rights reserved   -
By Laura Sanders  •  Updated: 14/11/2020

The COVID-19 pandemic has had a devastating impact on people working in the garment industry, after demand for clothes shrunk significantly at the start of the crisis.

As people all over the world were urged to stay at home, fashion brands cancelled billions of dollars worth of orders, leaving factories struggling to pay their workers.

Clean Clothes Campaign (CCC) estimates that these brands refused to pay for $16 billion worth of goods worldwide. This means that between $3.19 and $5.79 billion is owed to garment workers for the first three months of the pandemic alone.

One woman in Romania has chosen to speak out.

After receiving an unjustified cut to her monthly salary, garment worker Angelica Manole posted a picture of her paycheck on social media. She was fired, but her bravery led to a viral media campaign which held brands accountable for their actions.

During the first few months of the pandemic, workers at the Tanex factory in the town of Valenii received a cut of just over half their regular monthly salary without any explanation. The factory produces clothes for luxury brands such as Ted Baker, Lancome and JOOP!, to name a few.

With this reduced paycheck of €140, Manole and her co-workers were only receiving about 10-15 per cent of the legal living wage in Romania. Bosses at Tanex gave the excuse that workers were taking unpaid leave or not working full hours, but Manole was able to prove in court that she had worked full-time in April.

The women behind Europe’s big brands

Romania is the largest garment producer in Europe. An estimated 400,000 workers, of which 90 per cent are women, are making clothes for some of Europe’s biggest retailers.

While many assume these womens’ salaries are just a small part of the family income, in reality, many are the main breadwinners. Manole is one of them.

"When I lost my job, it was very difficult for both me and my family because only I was working at that time," she says.

Manole told Euronews that after a Facebook page was set up to help the workers of the factory, her father began receiving intimidating messages for supporting her online. She says that somebody from Tanex told her father not to get involved and that his daughter (Manole) would struggle to find another job for speaking out.

There were other labour and human rights violations that occurred at Tanex during the COVID-19 pandemic too, including intimidation and harassment of workers, non-payment of mandatory social insurance contributions, and not paying overtime.

In order to fight back, the workers, alongside the CCC, put pressure on three companies sourcing from Tanex, Ted Baker, JOOP!, and Massimo Dutti. Eventually, this prompted the brands to start taking responsibility.

Justice for the Tanex workers

We're told by the CCC that a labour inspection initially accepted Tanex’s narrative that employees had not worked full weeks/taken unpaid leave during the pandemic. But Manole explains, “It was not because of the pandemic that they cut wages, because we worked normally with more growth. We were glad we had work during the pandemic.”

It was only when the group of Romanian workers joined forces with the CCC and wrote to the brands themselves, that their voices were heard.

CCC told Euronews that Ted Baker “took quick and effective action” once they were made aware of what was happening at Tanex, and the other two brands followed suit.

Under growing pressure from campaigners, all the brands reached out to the factory. As a result, union access (which had previously been denied) was granted and the Romanian labour minister ordered a new inspection.

The result? Tanex was fined for not paying the legal minimum wage and for failing to maintain documents concerning unpaid leave. The labour minister, Violeta Alexandru, personally apologised to Angelica Manole following this.

Finally in September, the workers who were still employed at the Tanex factory in August received their full salaries. And after further pressure, those who were fired or left the factory in the months before were also paid what they were owed.

Manole has since found work elsewhere and her local community rallied together to raise money for her whilst she was unemployed.

"I want to thank all those who helped me by giving me their little to help me find another job," she says. "I could not believe that in two days they collected that money for me. It was very difficult for me to receive this money without working for them."

Angelica Manole did not expect that speaking out on social media would gain this level of international attention. "I hope that from now on all dissatisfied garment workers will have the courage to fight for their rights,” she concludes.

While the success of the Tanex workers’ case is to be celebrated, there are still thousands of garment workers around the world still not being paid what they are owed, states the CCC.

Brands like H&M have agreed to pay for any orders they’ve made to producers, but the CCC has found this does not necessarily guarantee garment workers are being paid in full. Their social media campaign #PayYourWorkers is calling on fashion brands to agree to supply chain transparency and to publicly commit to a wage assurance for their workers.

“We are asking brands individually to make a public commitment to avoid a situation in which everyone in a supply chain has responsibility, but in practice nobody assumes responsibility,” says Christie Miedema, from the Clean Clothes Campaign international office.

“Only if brands and retailers individually and publicly commit to a wage assurance can we avoid the traditional habit of pushing risks and responsibilities to others in the supply chain and make sure workers are not left covering the gap.”