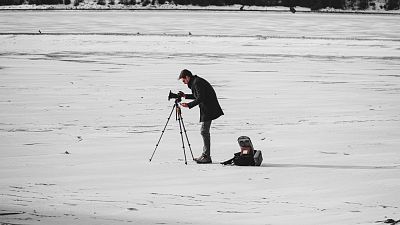 “It’s unfair to say they are jumping on the bandwagon, nature documentaries have always been motivated by conservation.”

Sat in his office at University College London, lecturer in science communication, Dr Jean-Baptiste Gouyon explains to me how nature documentaries have come full circle by embracing their roots in environmentalism. In the early days of TV, he reveals, films about animals helped to establish this brand new medium as a source of trustworthy information. Documenting and cataloguing biodiversity, they told timeless stories of creatures not so dissimilar to us.

“Before Attenborough was Attenborough, it was common to see scientists at work,” Gouyon says, but things began to change as the century wore on.

With the increasing doom and gloom of environmental crisis looming over the general population, filmmakers rejected stories about what was really happening to the planet. “There was a documented reluctance to engage with environmental issues, they didn’t want to push audiences away.”

During the 1990s, however, things began to change. “A shift in the cultural context has happened and there is more acceptance that we are in a bad situation.”

Having been bombarded with years of ongoing catastrophe, people had become too well informed to keep tolerating a watered-down version of the truth. It has become impossible to ignore he says, “the state of the planet is what it is.”

Now we’re hooked. 14.1 million people watched the BBC’s 2017 series, Blue Planet II making it the most-watched TV programme in Britain that year, according to the BBC. Natural history personalities like David Attenborough have become big stars, successfully transforming from amateur ecologists to folk heroes for those concerned about the future of our planet.

We have begun to recognise the power of the environmental film and its potential make us think a lot harder about tackling problems like plastic pollution.

The power of moving pictures

“There is no doubt that film as a medium has massive power to elicit an emotional reaction,” says Gouyon, “but there isn’t really any hard evidence to prove this yet.”

More so than the written word, these documentaries seem to pique our interest in the planet and potentially even drive us to take action. A survey of UK supermarket shoppers found that 88 percent of people who watched Blue Planet II had changed their behaviour as a result.

After watching the series, Darío Fernández-Bellona, a postdoctoral researcher at University College Cork, noticed that the programme was consistently trending on twitter the evening it aired. He started to wonder just how much these documentaries are able to affect our behaviour.

Using 30000 tweets and figures for visits to the Wikipedia pages of the animals featured in the series, he analysed this data to see what, if any, patterns of behaviour were influenced by watching the show.

"Films show nature without humans, not as something to engage with."

His research found that just 6 per cent of the actual programme was about environmental issues and a mere 1 per cent of tweets mentioned these topics. These figures didn’t look promising. Documentaries clearly aren’t useless for conservation, however, as they alter our perception of wildlife in other ways.

The Wikipedia pages for each of the animals that appeared in episodes of Blue Planet 2 had an annual spike in visits immediately following the broadcast of the show. Even this small connection with nature could be enough to create an awareness crucial to avoiding mass extinction.

One of the most successful elements of the modern nature documentary is the “making-of” segment. Usually a short section separate from the main show that reveals how some of the scenes were shot, the “making-of” lets us see behind the scenes. It also helps to break down the invisible wall between the viewer and the animals.

“Films show nature without humans, not as something to engage with,” explains Dr Gouyon, “the cameraman can be a role model for ordinary people and express more emotional responses.” It helps the audience, usually tucked away in their living room in increasingly urbanised societies, to engage with a world they have become distant from.

Engagement is undoubtedly the best way to get us to care more about the state of the planet. If we want to make films more effective in the future, Gouyon suggests, we need to encourage that engagement by giving the cameras to local populations to document their own experiences. “We can’t go by the imperialist model of Briton’s going and watching wildlife.”

We respond far better, it seems, to films about environmental issues that resonate with our own life experience. A prime example of this is the international response to the documentary The Cove.

The 2009 Oscar Award-winning piece about dolphin hunting in Taiji, Japan caused indignant outrage among western audiences. Its thriller-style treatment of documentary makers ‘uncovering’ the practice using spy-cams didn’t, however, go down well with audiences in the country where it was shot and many showings were met with protests.

This kind of documentary clearly raises the profile of problems like this globally but, within the communities able to actively change practices harmful to the environment it rarely has the same impact.

Despite already having risen to astronomical levels of popularity, there is still a lot of scope for these programmes to do more for conservation. Choosing to champion local voices could spell the end for popular eco-heroes like David Attenborough, but it might just uncover the identifiable voice many need to get behind action on climate change.