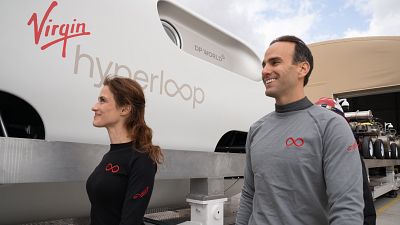 Richard’s Branson’s new green transportation system has made history by hosting its first two passengers on board the Virgin Hyperloop.

The hyperloop system was first launched in 2014 and has since run over 400 un-occupied test journeys on site in Las Vegas, Nevada. This week, founder and director Josh Giegel and Sara Luchian, were the first humans to take a trip in the high speed floating pod.

“I was watching along on a livestream at home and could not have been more excited or prouder of the wonderful team as they made transportation history,” said Richard Branson in a statement.

So what is a hyperloop?

In general terms, a hyperloop is currently a proposed mode of passenger and freight transportation, which has not yet launched in a mainstream way. The design was first released by competitors Tesla and SpaceX, but has since been adopted by Virgin.

A hyperloop is a sealed, near-vacuum like tube with low air pressure inside, through which a floating pod can travel. The technology means that not only is it a more sustainable method of getting around, it’s one of the fastest ways too. Pods can travel at airline or hypersonic speeds while being extremely energy efficient.

Branson launched Virgin Hyperloop six years ago and it is now the only company in the world to successfully test a hyperloop at scale. He plans to revolutionise transport, not in the coming decades but in the next few years, once full safety tests have been exhausted and investment secured.

This first human test exceeded 100mph (160 kph) inside the magnetic levitation pod. At full speed, however, it can travel three times faster than high-speed rail and more than ten times faster than traditional rail.

But how much time would you actually save using the hyperloop?

One example is the journey from Los Angeles to San Francisco - a distance of 382 miles (615km). If you drove, a car would get you there in around 6 hours. If you decided to fly, the journey would take roughly 1 hour and 28 mins. On board a Virgin Hyperloop, the journey time is less than half that - at only 43 mins.

How sustainable is hyperloop travel?

Virgin’s promo video describes the hyperloop as “on-demand sustainable mass transportation system that connects cities in minutes.” But what does that mean?

Firstly, the system is 100 per cent electric, meaning zero direct emissions. The Virgin team even describe themselves as “energy-agnostic”. The sealed tube can derive its power from whichever energy sources are available along the route. If rolled out in the Middle East for example, it would be possible to completely power the system with solar panels covering the tube.

“Without a massive leap forward, pollution from the transportation industry is expected to almost double by 2050 - well above the carbon budget,” states the company website.

“As fighting against climate change becomes an existential issue for cities across the globe, hyperloop will create a new, shared, electric mobility model for helping to permanently reform an industry with some of the world’s highest carbon emissions.”

Currently, the two-seater experimental pod is just for testing purposes. In future, the vehicle will look radically different, says Virgin, and should be able to hold up to 28 passengers.