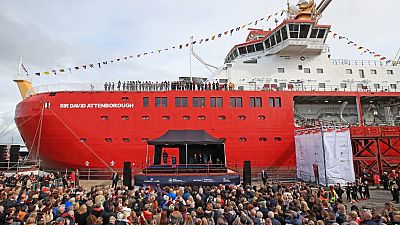 The UK’s most advanced polar research ship, the RSS Sir David Attenborough, is being put through its paces before beginning its first mission to Antarctica in 2021.

The British Antarctic Survey says that the new polar ship will “transform UK research in the polar regions” with missions critical to understanding climate change.

Onboard the 129m long, 15,000 tonne Attenborough are polar research laboratories and equipment that will allow crews to deploy ocean survey/sampling equipment.

“This magnificent ship will take UK scientists deep into the heart of the ice-covered polar seas. With state-of-the-art technology they will investigate the dramatic changes in the polar oceans,” says Professor Dame Jane Francis, director of the British Antarctic Survey.

“As we seek to find answers to the current climate crisis, this ship will take us to the ends of the Earth [...] to help us understand our future world.”

The professor told BBC News that, while there are growing concerns about melting sea ice in the Arctic, ice sheets in Antarctica are also being affected by our warming world.

“The RRS Sir David Attenborough is going to allow us to get right up to the edge of the ice sheets, to deploy its new technologies, to really understand what's going on.”

The ship caught the attention of the British public in 2016 when an online poll saw thousands of people vote to name it “Boaty McBoatface”. The suggestion was not taken up in the end, leaving many disappointed, and the ship was named after veteran natural history presenter Sir David Attenborough.

Boaty McBoatface didn’t entirely sink, however, as the Natural Environment Research Council gave the name to a submarine research vessel instead. This vessel has already made significant climate change discoveries itself. Last year, the remotely operated yellow submarine was used to research a link between Antarctic winds and rising sea temperatures.

The RSS Sir David Attenborough leaves today from Liverpool and will first make a journey of around 150km to Holyhead in Wales. From there it will undergo technical trials including vital tests of its ice-breaking capabilities over the next few months.

If the tests go well, the ship will set sail for its first Antarctic mission in November 2021.