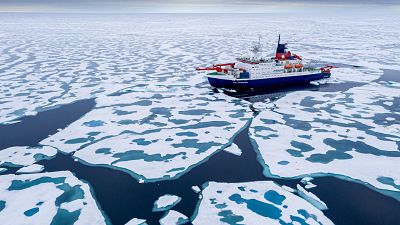 The world’s largest ever polar expedition will return to the German port of Bremerhaven on Monday with rafts of essential data about climate change.

After being stranded in the Arctic earlier this year due to COVID-19, the Polarstern is heading home for the first time in 389 days.

The aim was to spend a full year’s cycle trapped in the Arctic ice, to observe it freezing during winter and then melting again as the summer months approached.

Nowhere are the effects of climate change felt more strongly than at our polar caps, so gathering this information is crucial.

The ship’s mission is known as MOSAiC or the Multidisciplinary drifting Observatory for the Study of Arctic Climate and is being directed by the Alfred Wegener Institute in Germany.

A team of international researchers from almost 20 different countries has spent the last year measuring the effects of climate change on sea ice in the region.

“We’ve successfully monitored the lifecycle of the MOSAiC floe from early October last year to its end,” said expedition leader, Markus Rex when the ship broke free from the ice in July.

“It carried us through the Arctic Ocean for a total of 1700 kilometres, from the Laptev Sea, past the North Pole and all the way to Fram Strait.”

Travelling out from Tromsø last year, the ship had to make its way through waters where special icebreaking ships usually struggle with the thick frozen water. Polarstern required just six days to traverse the usually perilous permafrost.

“Last autumn we looked for, found, scouted, colonised and investigated our floe from every possible perspective. Ever since, it has been a steadfast, stable basis for our research camp,” added Rex.

The mission has collected data on the atmosphere, sea ice levels, ocean, and health of the Arctic’s ecosystems as an indicator of the health of the planet as a whole.

“Over the many months the ice floe has become our home, and we’ll always remember it fondly. But now it becomes water again. The time has come to bid it farewell and head north for the final phase of the expedition.”

Using drones and information from US satellites, the team is already certain of one sad fact, the ice is disappearing. According to measurements, sea ice has reached its second-lowest summer minimum since records began.

Beyond the Arctic expedition

On its return to Germany this week, the mission will be bringing back more than 1000 ice samples which will be analysed over the next two years.

The information from these samples will be used to create climate models that could help predict environmental phenomena like heatwaves and heavy rain. It could also help to work out what our climate will look like over the next 5, 10, 50 or even 100 years.

Data was also collected about organisms living in extreme conditions during the long winter months of complete darkness. In the polar night, water samples were taken to study plankton and bacteria that survive in these severe marine ecosystems.

Since it set off from Tromsø in Norway in September 2019, the crew has seen around 20 polar bears, arctic foxes, and other Arctic wildlife.

Natural disasters have doubled due to climate change, says UN