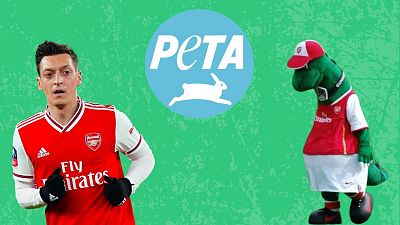 One of the internet's biggest stories this week has just taken a whole new bizarre twist.

London-based football club Arsenal, who play in England’s top flight league, made their long-time dinosaur team mascot redundant. The Gunnersaurus, named after Arsenal’s nickname - the Gunners, has been a fixture at the club for nearly 30 years. But, amid widespread cuts in staff, Jerry Quy who has had the role for 27 years, was made redundant.

As news of Jerry’s termination was made public, so too was an outpouring of support from football fans around the world.

At the same time, job offers began flooding in too. Everyone, from Shrek’s adventure - an amusement show in London, to PETA UK reached out to the now unemployed mascot.

The animal rights organisation sent a letter to Arsenal’s manager Mikel Arteta, offering to hire the dinosaur until stadiums reopen. The group intends to use Gunnersaurus to help promote vegan food.

"In the middle of a pandemic caused by eating animals, there's no better time for people to ditch prehistoric meat-based diets in favour of an arsenal of healthy plants," says PETA Director Elisa Allen.

"Vegan eating is one of the easiest ways that anyone can be more, well, green. And Gunnersaurus is the perfect mascot for a planet-friendly lifestyle."

In the letter, PETA highlights that vegan food is the most effective way for individuals to reduce their carbon footprint, and the group plans to use the dinosaur to continue to raise awareness.

But PETA’s plans may have just now been scuppered by Mesut Ozil, a midfielder for Arsenal, who has offered to pay Jerry Quy’s salary in full for as long as he is at the club.

The former Germany international joined the Gunners in 2013, but his contract is due to lapse at the end of this season. His current salary is believed to be around €380,000 a week.

Gunnersaurus has yet to officially respond to these competing offers, although he has been approached for comment.