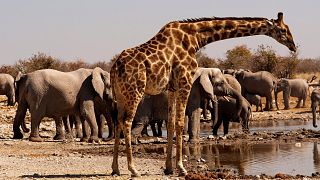 Six million euros is being allocated by the International Union for Conservation of Nature (IUCN). The funding is classed as emergency relief and aims to address biodiversity conservation needs brought about by coronavirus. Many animals have been put at great risk, both directly and indirectly, as a result of the pandemic, and the management of protected land areas has also been negatively impacted.

“The COVID-19 pandemic has shown us just how vulnerable conservation initiatives are to major disruptions. The pandemic has left local communities who protect wildlife struggling to make a living, and many threatened species increasingly exposed,” says Dr Bruno Oberle, IUCN Director General.

The grants, which are being funded by the European Union, are managed in partnership by IUCN, the European Commission, and the Organisation of African, Caribbean and Pacific States.

A further four million will be allocated to the IUCN Save Our Species African Wildlife Initiative to help safeguard both terrestrial and freshwater species in continental Sub-Saharan Africa and Madagascar. These aim to protect threatened species from anticipated increases in poaching, as well as reducing the risk of disease transmission from humans to wild animals, especially great apes.

Great apes have been put at direct risk as a result of the pandemic, because they can be infected with coronavirus by humans (such as when researchers or tourists bring the virus to their habitat). But other species are also suffering indirectly.

Revenue that has been funding anti-poaching patrols and community conservancies has been abruptly cut off, leaving a vacuum of security and the potential for more poaching. Elephants, rhinos, giraffes, pangolins, primates, turtles and other marine species are all in need of better protection going forward, according to the IUCN.

“The BIOPAMA and Save our Species grants will provide critical and urgently needed support to local communities at the frontline of biodiversity conservation while guaranteeing the full respect of human rights,” explains Jutta Urpilainen, European Commissioner for International Partnerships.

“The projects will increase the resilience of local communities,” she continues, “the pandemic has shown the importance of wildlife conservation, which is essential to prevent the spreading of zoonotic diseases.”