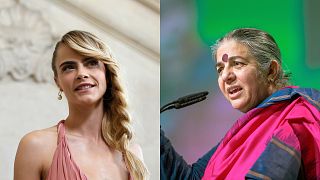 The discussion with the Indian activist and food sovereignty advocate will centre around the interconnected crises of food, health and the climate. Dr Vandana Shiva is a leading figure in the anti-globalisation movement and works to protect “the diversity and integrity of living resources”, particularly native seeds. She promotes organic farming and fair trade and, in 1991, established a group to protect seeds in India called Navdanya.

After founding environmental justice platform EcoResolution in January 2019, Delevingne has been raising ecological awareness and empowering others to do the same ever since. Each month, the platform delves into a new topic, exploring potential solutions and chatting with trailblazers taking action around the world.

The live-streamed conversation will explore the role of small farmers and their needs, the link between diversity and localisation and the future of producing food in a world threatened by climate change.

“We need to reinvent so much of how we live in the 21st century. This can feel hugely overwhelming - it’s easy to feel powerless, and too small to make a difference. Yet if we can step up, rather than shut down, there is an exciting invitation before us. To ignite individual initiative - to lead true change, not just buying better reusable coffee cups.”

Why is reducing food waste so important?

According to UN statistics, worldwide 1.3 billion tonnes of food is wasted every year. At the same time, 820 million people are undernourished.

“Food loss and waste reduction should be seen as a means toward achieving other objectives, including improving food security and nutrition, reducing greenhouse gas emissions, lowering pressure on water and land resources and can increase productivity and economic growth,” states the United Nations Food and Agriculture Organization.

For Dr Shiva, it is crucial that we no longer depend on industrial agriculture and genetic modification as a means to feed the planet, as we are losing out on key resources. So far, she has assisted grassroots organisations in Africa, Asia, Latin America and Europe in opposing agricultural development via genetic engineering.

In the past, Shiva has even accused multinational corporations of attempting to impose “food totalitarianism” on the world.

Instead, she believes in organic farming and has herself established over 40 seed banks across India. Dr Shiva helps to provide regions with adequate resources and educates farmers about why individualised, diverse crops are preferable over monoculture food producers.