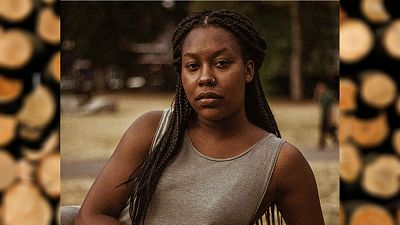 Tianna Johnson, founder of Black Girls Camping Trip.   -   Copyright  Paula Abu   -
The opinions expressed in this article are those of the author and do not represent in any way the editorial position of Euronews.
By Tianna Johnson  •  Updated: 12/03/2021

Tianna Johnson is a writer, academic and community organiser who started the Black Girls Camping Trip to encourage young, Black women to explore the benefits of the outdoors.

On August 25th 2018 at 12:18AM, I tweeted: “Any black girls in London wanna be part of a black girls camping trip? It will be a nice way to make new friends." The Tianna who lay in bed on that day was dragging herself out of a month-long depressive episode riddled with binge-watching, eating and drinking.

This was the day I started Black Girls Camping Trip, an outdoor retreat for Black womxn and non-binary people in the UK (womxn referring to non-binary people who are on the femme side of the gender spectrum). Within three weeks of that tweet, I would have produced my first event for roughly 65 Black women.

Looking back now, I’m overwhelmed by the inevitability of the situation. When it comes to my mental health, the odds will always be as highly stacked against me as the tidal-wave of inequalities that I experience in the UK as a Black woman.

When I started the camping trip, it really was my intention for it to be just that. My own battles with poor mental health and the effect camping had on it made it inevitable that the trip would eventually become a retreat.

Black women in the UK are so much less likely to be believed during medical emergencies that we are five times more likely to die during childbirth than our white womxn peers. The more I researched, the more I saw myself reflected in the stats: more likely to be sectioned, to self-harm, to suffer with depression, anxiety, OCD and panic disorders. I had experienced many of these things and my sisters were also suffering. It was ripping through our community and the only people who cared, and I mean really cared, were other Black women.

It was ripping through our community and the only people who cared, and I mean really cared, were other Black women.

A positive discovery can arise from trauma

Everything had started in Spring 2016. I experienced a traumatic, life-changing event. It wasn’t existential; instead the entire trajectory of my life and my identity shifted. I no longer recognised myself and, as someone who had loved and appreciated themselves deeply, it was the worst thing that could have happened.

I had never dealt with trauma before. One of the things I have learned from my work is that trauma doesn’t affect you more or less depending on when you experienced it. You might have been traumatised for your whole life, or alternatively had a happy and structured upbringing but experienced one traumatic event - either way it’s all consuming. I coped by fleeing.

On New Year’s Day, 2017, I arrived in Knoxville, Tennessee to detach myself from a place where I had experienced so much pain. I went because I was feeling reckless and I wanted to do something unpredictable. What I didn’t know was that I was experiencing Major Depressive Disorder.

The first time I camped, I was invited by a fellow student named Melanie, a white-American friend. The plan was to drive that evening to North Carolina and hike up a mountain and then camp at the top. I invited my friend Shirley, who was my Black American roommate; she was my closest friend in the States.

The struggle up the mountain, for someone who had never hiked before was brutal. I hoped my ankle would snap or something so that I had an excuse to end it but, once we reached the top, I started to feel something I didn’t know I could ever experience in my life.

As the sun set, Shirley wrapped my hair in one of the traditional ways for us Black women - and I did hers. We had no mirrors up there, all privileges left behind, and it was an intimate moment. The other girls watching us with interest, stuck on the outside of cultural rituals carried down from our foremothers to us.

The great outdoors doesn’t have to be a “white space”

The absence of Black people in the outdoors is due to the perception of it as a “white space” and an accessibility issue. According to the 2001 Census, almost 97 per cent of all Black Britons in England live in urban areas and with more of us being born and raised in the city, instead of migrating, it’s clear that the opportunity to live surrounded by nature is a privilege.

For us, living in the country is a white space because there are little to none of us in rural England.

The opportunity to live surrounded by nature is a privilege.

This is opposed to our cousins in America, especially those in Tennessee who live on the same countryside where their ancestors were enslaved - they have a continuation of country life whereas we have a disconnect. With Black Britons also living on the lower end of the country’s economic spectrum, so many of us are living in overcrowded conditions and for many of us from estates and tower blocks, there is no access to private gardens.

Local parks are not a safe space for us either. In 2000, Prime Minister Boris Johnson wrote in The Guardian: “When I shamble round the park in my running gear late at night, and I come across that bunch of black kids... I would love to pretend that I don't turn a hair.” We know this is how we are perceived in public spaces, seen as outcasts and criminals.

My aim is for Black Brits to be given the opportunity to carve out our own space and create our own relationships with the outdoors. Camping healed me and since 2018, I’ve watched it heal others.

From the woman who created Black Girls Camping Trip to heal her sisters and non-binary siblings, I hope that one day I can give over the reins and they can explore the outside world on their own.