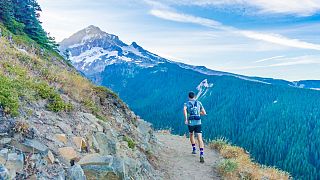 If lying on a tropical beach or exploring museums and galleries on your summer holidays doesn’t really appeal, then maybe a week (or more) in the mountains might. Europe is home to some of the world’s greatest trails, and with such variety, it can sometimes be hard making a decision. From Scotland to Corsica, here are some of the most iconic options. But beware, they’re not a walk in the park and all that stunning scenery comes at a price – burning thighs for example. So, as with any outdoor activity, make sure you’re well prepared and well-informed before attempting any long-distance treks.

What could be more classic that a loop around one of Europe’s most formidable mountains, including some of Western Europe’s most stunning scenery. One of the most exciting prospects about this is that it takes in three countries throughout the 170km route - France, Italy and Switzerland - and can be done clockwise or anticlockwise. The full loop usually takes around 10 days (60 hours) depending on pace and experience and includes 10,000 metres of cumulative ascent.

However, those on a tighter time schedule shouldn’t be deterred as there are opportunities to utilise public transport to speed things along, or the various start points mean the loop can be done in sections over various trips. There is a variety of accommodation to suit all types along the way, from hotels and lodges to huts and hostels and even camping allowed in certain places. Due to popularity, consideration should be taken on where to stay throughout the summer season, as many places are likely to book up quick.

From one of the best know trails to one of the hardest. The GR 20 has a reputation as one of the toughest long distance trails (grande randonnée, hence the GR in the name) in Europe, bisecting the Mediterranean island from North to South. The route runs from Calenzana in the North to Conca in the South, although the reverse is also an option, while Vizzavona is the midpoint. The reasons the trail gets its reputation are the conditions and the length - roughly 200 kilometres and taking around two weeks depending on fitness.

If undertaken in the summer the heat is a real factor and the terrain is rough and rocky, especially in the more mountainous northern half of the trek, where hikers can expect more ascending and descending. Placed throughout the length of the trail are refuges maintained by the Parc Naturel Regional de Corse - through which they can be booked - while other private options are also available. Tours can be organised with local agencies, which will help organise accommodation and in some instances luggage transfers and local guides can also be hired.

Winding its way up the West coast of Scotland, the West Highland Way goes for 154 km through moorlands, alongside lochs and up over steep peaks. The trail takes roughly a week depending on experience and preference but shorter trips can be completed making use of public transport. The typical trip starts from Milngavie and travels North West to the Fort

William. This way is supposed to take in the less rugged southern section first, providing walkers with something akin to a warm up. For those wanting to add extra difficulty, Ben Nevis - the UK’s highest peak - can be conquered after reaching Fort William, probably after a rest though. There are a number of bed and breakfasts, guesthouse or hostels on the route, or for those feeling more adventurous there is the option to wild camp.

The Dolomites in Italy offer excellent hiking for amateurs and experts alike, and the Alta Via no.1 is a classic route taking in some of the most dramatic sites the range, a UNESCO heritage site, has to offer, not to mention some places of historical significance including the burial site of the mondeval man - a Mesolithic hunter thought to be over 7500 years old. Crossing the Val Fiorentina from North to South from the Lago de Braies to Belluno the 130km trail requires up to two weeks to complete and although not technically difficult includes roughly 8,000 metres of ascent and 10,000 metres of decent. Walkers will spot some of the fantastic peaks in the region including the Monte Tofane, Marmolada and the Monte Civetta. Throughout the route there are various refugios along the way which can be booked in advance - highly recommended as throughout the summer they’re likely to book up fast.