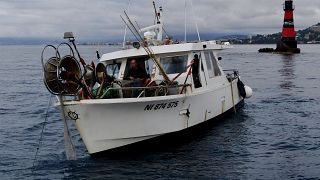 The Coronavirus means European fishermen are weathering a new kind of storm. With fish markets and seafood restaurants shut down, supply chains broken and large vessels staying in port, thousands of jobs are at risk. So, what are the fishermen doing, and how's the EU helping to keep the sector afloat?

The French Riviera is unusually quiet. With luxury yachts and cruise vessels forced to stay at port, only artisanal fishermen like Loïc Gourlaouen are still going out to sea. April to June would normally be the busiest time of year, but the pandemic has changed all that. To stay afloat, Loïc has had to adapt to the new normal.

"Our usual clients are restaurants, and we lost them due to the shutdown. Our remaining customers are private individuals. We’ve started delivering fish to most of them. We fish in the morning and do deliveries in the afternoon. That makes for long days at work," Loïc says.

Despite losing half his turnover, Loïc and fishermen like him, say they feel a duty to keep providing fresh fish to their customers who are stuck at home. Orders are taken by phone.

With delivery on top of going out to sea, the working day can last anywhere from 4am to 9pm. But the fishermen know they are fortunate to still be working. In some parts of the Mediterranean and the Black Sea, more than 90% of small fishing vessels have been forced to stop operating because of the pandemic.

Although street markets are closed, fishermen in the southern French town of Antibes have been given permission to sell their catch directly at the port. For those who choose to stay at home, there is compensation for lost income: just one of the emergency measures adopted at EU level to help mitigate the crisis.

Many local fishermen, however, say they prefer to keep working - with the necessary precautions in place - rather than rely on government support.

“I’ll be honest with you, I stayed at home for all of March because I was so scared. And I only returned to sea after I saw that the number of new cases in Antibes had gone down. I’m trying to have as little contact with others as possible. So I fish at sea, while my colleague sells what I catch here," says fisherman Jérôme Bottero.

“Subsidies were handed out for those who had no turnover in March. I applied and got it. But when the subsidy was renewed in April, I did not apply, because I'm earning something, even if I’m not making what I usually do. We need to think about those who are making nothing at all,"explains Denis Genovese, the President of a local initiative called Alpes-Maritimes Committee for Maritime Fisheries and Marine Aquaculture.

A Lifeline for Europe's fishermen

Europe's fishing industry has been battered by the coronavirus lockdown. To find out how the European Union is supporting the sector Euronews' Denis Loctier spoke to Virginijus Sinkevičius, European Commissioner for Environment, Oceans and Fisheries.

Denis Loctier, Euronews: "What's the overall situation in Europe? How badly did this crisis hit our fisheries and aquaculture?"

Virginijus Sinkevičius, EU Commissioner for Environment, Oceans and Fisheries: "It is still hard to draw the final conclusions. Nevertheless, we can say that the fisheries and aquaculture sector has been hit hard already. The demand for the fresh fish dropped dramatically. So for us, it's very important to help the sector. So when the market returns back to normal, the sector as well could return to normal pace."

Denis Loctier, Euronews: "What are the main measures taken by the EU so far?"

Virginijus Sinkevičius, EU Commissioner for Environment, Oceans and Fisheries: "First of all, of course, it's the temporary cessation of activities...as the market of fresh fish went down dramatically, it's clear that some of the vessels cannot continue their activities. That's why fishermen and women are forced to stay at ports. The Commission is going to fund 75 percent of temporary cessation of activities. Secondly, there is still fishing vessels who are out there, fishing, aquaculture farmers - they are basically left with their production. So they need to put their fish somewhere. And storage aid is the second help which helps them basically to wait this period for a better time with their catch and then sell when the market returns. Thirdly, the state aid was increased up to €120,000. The member states can react very quickly, very proactively and help fishermen and aquaculture farmers with the direct funding to them."

Many farms are having to sell or freeze their fish once they reach commercial size. The company Cannes Aquafrais near the southern French city of Cannes has the capacity to grow 750 tonnes of sea bass and sea bream. With restaurants closed, the farm is now selling to food retailers.

“We've stopped growing stock until the markets that we are interested in come back, so farm output has decreased slightly to make sure the fish density inside the cages doesn’t exceed the limits we must maintain,"says the fish farm's head of production, Guillaume Gilbert.

Despite that, Michel Moragues, the firm's commercial director admits there will be an impact: "At the same time, there's a clear economic impact. Decreasing productivity costs money. We can maintain our stock, but we cannot retain it indefinitely."

Just like the rest of the supply chain, fish processing factories have been badly hit by the collapse in demand.

The factory 'La Poissonnerie de Puget-sur-Argens' is running at a fraction of its capacity. Serving mainly local take-away restaurants and eateries, it's lost about 80% of its turnover. Come June, the management fears it will lose government support enabling the firm to place staff on partial unemployment benefits.

"Our employees are furloughed 80% of the time. Only five or six people come in a day, depending on the work we have. Some of the days they may come for two or three hours, other days they're not coming in at all. And I think that even after the recovery, we will still be impacted - we'll have lost around half of our turnover," says the factory's owner Anthony Garnham.

Sourced from the Cannes Aquafrais Farm nearby, the fish are processed at the factory as part of a local initiative. The project was financed through the EU's European Maritime and Fisheries Fund.

The fish are then delivered to seafood restaurants that are still closed to the public, such as establishments like the one run by chef Stephan Miso.

His "plat du jour" or dish of the day, consists of sea bream in cream sauce with Asian spices, fish skin chips and almonds. It is prepared and then sent to medical staff at a local hospital.

"That's 100 meals, 100 people who will eat as if they ate in my restaurant, but at the hospital where they work. We cooked this fish twice, filleted and also rolled in the form of a rose, baked in the oven, with olive oil and white wine... And voilà, this is what's for dinner!..there's a real wave of solidarity and support, from the fishermen, from Europe, from all those who help with funding - and it's a real pleasure to cook again, to reopen our kitchens, to work again and to feel useful. That is important," Miso says.

"We have to work, but always with the pleasure of providing good produce, seeing everyday our customers satisfied with our product — above all, that’s what drives us," concludes Loïc Gourlaoue.

A ban on cod fishing leaves fishermen worried for their future