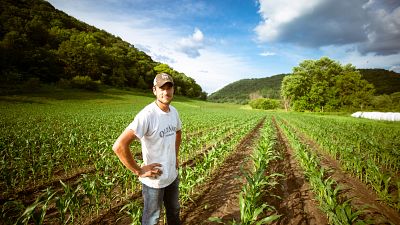 Supermarket shelves have looked a little more sparse than usual in recent weeks. With a shortage of seasonal workers to pick our fruit and veg and restrictions in place on borders, there has been an enormous strain on the supply chains that feed the EU.

To try and fill the gaps in our weekly shop, many have been using the unexpected free time to reevaluate their own gardens as a potential source of food. Over the course of the lockdown, interest in ‘growing your own’ has soared with hits on pages offering advice on the topic more than doubling on the Royal Horticultural Society’s website.

Growing your own greens is great, but not all of us have the time or space to do so. For those cooped up in flats in city centres, homegrown efforts are limited to small-scale balcony and windowsill projects. A lack of green space can leave us feeling detached from the natural processes that help fill our fridges with fresh fruit and veg. However, that doesn’t have to mean limiting our choices to what’s left over in the fresh produce aisle.

Necessity has increased our awareness of options that put us in closer contact with farmers in our communities, meaning that the pandemic could offer a radical opportunity for change. The Food Foundation found that weekly sales of veg boxes have increased by 111 per cent in recent weeks resulting in an estimated 3.5 million boxes being delivered in the UK alone. With this surge in interest for locally produced food, a post-COVID future is likely to see consumers reluctant to go back to the way things were before.

Veg boxes form just one part of something called Community Supported Agriculture (CSA). This is loosely defined as a partnership that shares the responsibilities, risks and rewards of growing food between farmers and consumers. Groups organising to democratise production and bring small farms to all kinds of communities are using CSA as a way for sustainably grown, fresh food to become accessible for everyone. Even those without the privilege of having their own green space.

Fresh fruit and veg direct to your door

Usually operating on a very local scale, community supported agriculture projects produce mostly fruit and vegetables - but some also provide milk, honey and meat direct from farmers. For the average person, taking part can mean anything from working on a shared plot of land to signing up for subscription boxes or taking a share in an entirely community-owned farm.

Often, exactly how a CSA scheme works is defined by the culture of the community in which it is based, with all kinds of exciting operations springing up across Europe. There is an incredible amount of flexibility in what a project can be but the main goal is to remove the multitude of steps between farm and plate which come from modern industrial farming practices.

Eight years ago in the UK, the CSA Network was launched to support schemes helping to bring farmers and their communities together. Now, two-thirds of members in the UK are supplied with all or nearly all of their vegetables by these projects and over 70 per cent of people involved reported that it improved their quality of life, changing their cooking and eating habits for the better.

Perhaps the most striking benefit, particularly in times of global crisis, is that local farming is often more reliable than the industrial food chain. By avoiding all of the packaging and processing that takes imported food from warehouse to supermarket shelf, putting the food directly into the hands of consumers means less impact on availability when an event like an international pandemic occurs.

One farm in Cambridge is bringing people together

Existing programmes have seen a boom during the health crisis but some have started up specifically to use people’s newfound motivation to get involved with growing food. David Walston runs a 900 hectare farm south of Cambridge, UK, and started CoVeg just as social distancing measures came into place in the UK as a way to combat potential food shortages during the pandemic.

“I’d been thinking of doing something similar for several years, this was just the kick that I needed,” Walston tells euronews Living. “Also once I came up with the name I thought it would be a shame not to put it to use!”

Walston adds that as a farmer he has specific assets that are not available to most. “Since we are all trying to pull together at this point in time, I thought that if I contributed in these areas, it would compliment well with the community providing the time which is needed, the end result being a positive one for all involved.”

It will also never harm to get more people realising what goes into producing food, and having an appreciation for the problems and rewards related to that.

Currently, there are two sites, one which operates more conventionally with different crops in separate areas and a ‘Chaos Garden’. Here a diverse range of crops is planted together to be harvested once they are ready, allowing the plot to evolve through the seasons with different plants taking over at different times. Increased biodiversity encourages pollinating insects to visit and may even help prevent pests that can decimate crops. It’s also a great way to use up leftover seeds.

“We’re trying to get the local communities involved in understanding about food production,” he explains, “hopefully producing a surplus that can be distributed to those in need in the surrounding areas.” Like most community farming projects, CoVeg is operating on a very small scale and the output of food is unlikely to be particularly large. There are other more “ethereal” benefits though, Walston says, like getting people outside, teaching new skills and being involved in stimulating work.

“It will also never harm to get more people realising what goes into producing food, and having an appreciation for the problems and rewards related to that.”

Farmer Walston hopes that interest in volunteering for the project will continue in future. With limited time and energy himself, he wants it to become self-sustaining going forward.

“I would like to think that CoVeg will be successful and people will want to continue after the threat of COVID has faded away. I don’t have specific hopes for the program, other than I would like people to take something positive from it, and have a desire to keep going.”