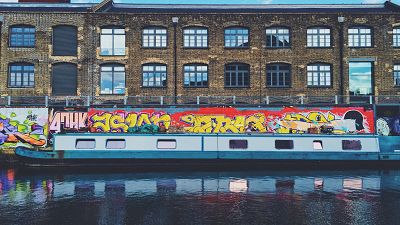 Kicking back in the comfort of an East London houseboat with owner Matt, I barely notice the movement of the water below me. Now and then, a ripple can be felt through the room, as a narrowboat passes and my cup of tea clinks gently on the coffee table. As we pause mid-conversation to wave at the passing boaters, I get the sense that the community of canal dwellers is enviably close. When I think how many times I’ve met the neighbours in my building, it hardly compares. There is a particular sense of intimacy between boat residents - all of whom have chosen to live this unconventional way of life in the city, merging nature with urban living.

I’m spending my Sunday afternoon on a ‘wide beam’, the more spacious option for canal living. Wide beams are generally between 10ft and 12ft in width as opposed to the more cosy option of a narrowboat, only 6ft to 10ft. I feel completely at home in the space, in fact, it’s not much different from my own living room. A sound system sits in the corner of the room, an L-shaped sofa shapes the space and a fully equipped kitchen with oven, hob, sink and microwave is on the far side of the open-plan room.

Matt tells me the story of how he bought his boat, a decision he primarily made for financial reasons. The cost of a flat in London was just too daunting and expensive, so a boat seemed like a more realistic alternative to be able to buy. He managed to obtain a mooring by sheer luck and good timing, and as the highest bidder for the spot, he can stay put for up to three years.

“We are lucky to be able to plug into electricity and to have access to a tap to fill up the water tank,” Matt tells me. “If you’re continuous cruising, you have to take more time to collect water and make sure your batteries are charged.”

No hairdryers and toilet disasters

Continuous cruising is a bit like having a part time job, Matt admits, as without a mooring (essentially a rent contract for boats), you have to find time to move the boat every two weeks. You can’t plug your boat into the mains, so your energy supply relies on batteries - and there are some pretty unglamorous practicalities that need taking care of too.

I meet Emily, better known as Maid of Gingerbread, who has her own business making gingerbread houses and sculptures. While she loves the minimal side to living on a narrowboat, she confesses there is a lot of maintenance to keep up with.

“Of course there are downsides”, Emily says, “having to keep a fire going in order to be warm and comfortable, not being able to use hairdryers/TVs/other powerful electric appliances, and being up close and personal with your waste!”

Matt agrees, describing how he was met with a steep learning curve when first buying the boat. Despite being moored on the canal, he still has to empty the toilet waste and fill up the water tank every two to three days (chores those of us on land simply never have to think about).

“I’m not going to take an unnecessarily long shower because I know I’ll just have to fill the tank up again,” he tells me. This raises a much healthier awareness of the amount of water he uses every day and encourages him to conserve it – as much for convenience as for sustainability purposes.

What do boat residents all have in common? Toilet troubles, Matt tells me with a knowing laugh. You may spend your days gliding down the canal amid the ducks and falling leaves, but if you take your eye off the mark, you might have to contend with what Matt calls “poomageddon”. When I ask what this refers to, he sheepishly admits that the waste tank of his macerator toilet overflowed just after he moved in, a lesson learnt the hard way.

One way to avoid having to empty your waste is to install a compost toilet, as Emily has on her narrowboat. She says, “I have a composting toilet system, so I don't use any water or chemicals to deal with my waste.” Instead, it just naturally biodegrades.

House vs. houseboat, which is more sustainable?

A study on the environmental impact of household consumption in 2015 highlighted that over 60% of global greenhouse gas emissions derive from houses on land. As one of the main criteria considered was size, many were prompted to join the ‘tiny house’ movement to improve their ecological footprints. Much like canal boats, ‘tiny houses’ (typically measuring under 400 square feet) require less energy to heat and are therefore more sustainable. Among 80 ‘tiny home’ downsizers studied in the United States, environmental impact was thought to be 45% less. The factors they considered included reduced building material waste, and a propensity to grow and make food more locally as the houses tended to be in more rural areas.

So does the same principle apply to houseboats? When it comes to sustainability, the jury is out, with valid arguments on both sides.

Lucy works for Transport and Environment campaign group in Belgium, and lives on a renovated Dutch sailing barge with her partner. For her, it is absolutely a greener way to live, on balance.

“I do think living on a boat is sustainable because in general, you are living in a smaller space and being more careful with your use of resources (water energy etc). The boaters I know seem more environmentally aware and mindful of reducing their waste.”

Matt agrees, “you’re more aware of where things come from” while Emily says that she likes how it forces her “learn proper skills and be totally independent.”

“I also have far fewer belongings now, which I think just naturally makes you focus on looking after what you do have and fixing stuff rather than buying more”, she adds.

Despite their advocacy for floating homes, all three residents mention the glaring problem of Diesel fuel. Canal boats all run on what is called ‘Red Diesel’.

Lucy tells me more. “Red Diesel combustion produces emissions in the same way as if burnt in a car. You will have Sulphur Oxides (SOx), Nitrogen oxides (NOx) and particulate pollution.” She adds, “I imagine most engines don't even have after-treatment to reduce these emissions.” An after-treatment system is a series of components that cleans the diesel exhaust, reducing the emission of harmful pollutants into the environment.

However, the more conscious canal boat owner can mitigate their use of Diesel for anything other than moving the boat. Rather than charging batteries through the engine, Emily tells me she uses a “super solar panel” for all the electricity she needs to run a home. As a result, she has only needed to fill up her Diesel “once in over 18 months of being on the water”, covering over 40 miles of canal/river, “so it's very little compared to running a car”.

Over in Brussels, Lucy tells me her partner is campaigning locally for cheaper electricity in their harbour to get rid of Red Diesel use. “There is also an option for ground source heat pumps which can be installed on the boat,” she says.

Being surrounded by nature

For Emily, growing up on narrowboat holidays and always loving the water meant that buying a boat seemed a logical shift to make. “I was fed up of having no rental security”, she says, “I had to move flat 22 times in 17 years - the landlord always sold the flat!”.

Living on water also means your home doubles as a vehicle on which to take trips and go on holidays with friends. With moorings in London ranging from more central locations, in Kings Cross and Broadway Market, right out to Uxbridge and Essex – there is plenty to explore further out in the countryside. Houseboats are “probably not the sustainable panacea” to environmental problems, as Matt puts it, but there is certainly a heightened awareness around consumption. As a result, residents are more conscious of conserving their resources.

I conclude that living in, and amongst, nature in the middle of the city seems a pretty magical way of life.

“You’ll be washing up after dinner and some canoers will just drift past your window, or a little group of ducks will float by.”

These moments are beautiful, says Matt, and being surrounded by wildlife in London is quite a unique experience – it makes all the maintenance worth it.