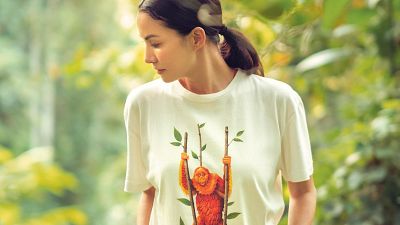 In anticipation of World Wildlife Day on 3 March, eco-conscious clothing brand Pangaia has unveiled a new range of t-shirts to raise awareness of mammals in trouble.

Some 25% of all beings threatened by extinction today are mammals, while 25% of mammal species are at risk of becoming extinct, according to Live Science. It comes as the International Union for the Conservation of Nature (IUCN) declared the complete extinction of 160 species between 2010 and the end of 2019, including the Indo-Chinese warty pig and the Capricorn rabbit-rat,

Pangaia’s Protect the Species range pays homage to those at risk, with endangered species including the Sumatran Elephant, Sumatran Orangutan and Giant Panda featured on its new designs.

It comes as part of a collaboration with model and activist Nadya Hutagalung and artist Raku Inoue in an effort to highlight some of the most endangered species around the world.

For other products, the company plants a tree per purchase. Working with non-profit group SeaTrees, it is focused on planting mangrove trees on Biak Island, Indonesia. Each mangrove planted sequesters a ton (907kg) of carbon dioxide from the atmosphere.