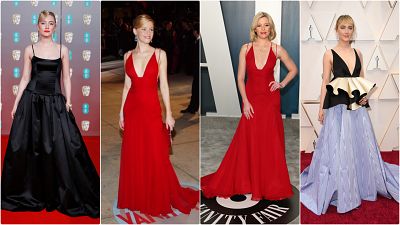 Director and actress Elizabeth Banks proved not all clothes go out of fashion after wearing her 2004 red carpet dress for last night’s Oscars after party.

Banks looked almost indistinguishable from her younger self, having only altered her hairstyle for the 2020 version of the look opting for a relaxed bob in place of 2004’s sleek updo. She donned the strappy chiffon Badgley Mischka number once more for the star-studded Vanity Fair Oscar Party.

The plunging fishtail gown debuted in Badgley Mischka’s 2004 fall collection, and was repurposed to highlight the partnership between RAD (Redcarpet Advocacy) and NSI (New Standard Institute), a non-profit creating new standards for the fashion industry to achieve sustainability.

Though not nominated for an award, Banks rocked the scarlet dress on the red carpet after brainstorming the idea with stylists Wendi & Nicole as well as designers Mark Badgley and James Mischka.

Elsewhere, Joaquin Phoenix continued wearing the same suit he’s been wearing all this awards season. Known as one of Hollywood’s most vocal eco warriors, his Stella McCartney tuxedo has already had outings to the Golden Globes, SAG Awards and the BAFTAs.

He has switched up his neckties however, opting for a black tie for his win at the SAG Awards and a bowtie for his triumphant nights at the Academy Awards and BAFTAs, where he picked up a cabinet’s worth of Best Actor gongs for his role in Joker.

Kaitlyn Dever, star of coming-of-age comedy Booksmart stunned in a crystal-studded sustainable Tencel fabric dress, reported to have taken artisans more than 1,900 hours to create. Tencel is made from responsibly sourced wood pulp, which is dissolved and spun to create fibres up to 50% more absorbent than cotton.

Meanwhile Bond girl Lea Seydoux’s white-belted gown with halter top and meringue-style drop hem skirt was made of organic silk faille and Tencel Luxe yarn. And seamstresses had a rush job on their hands to recycle material from the black Gucci dress Saoirse Ronan wore at last week’s BAFTAs into the bodice for this week’s bespoke black and lavender Gucci gown.

Sustainability wasn’t the only issue stars chose to make a statement on during this year’s Academy Awards. 2010 Best Actress winner Natalie Portman chose to embroider a cape with the surnames of women who’d directed notable films eligible for a nomination at this year’s awards. None of the directors in the Best Director category were female.

Waad Al-Kateab, director of documentary For Sama, also used embroidery to make a political statement. The Syrian journalist and activist wore a gown with Arabic script covering the back and train. It was later revealed on Twitter that the embroidery was a poem, translating as “we dared to dream and we will not regret dignity”.