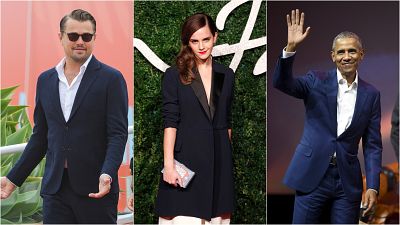 Documentary-maker and all-round British treasure Sir David Attenborough has topped a list of celebrities most likely to save the world. Nearly nine in ten people (87%) polled thought the 93-year-old nature-lover was best placed to help the planet sidestep catastrophes such as global warming.

The public was asked who they thought had the weight of influence and respect to change thinking among the masses to bring about more planet-friendly actions.

In the top nine, Sir David was the only one not to have an active social media presence, but his longstanding TV presence appeared to resonate throughout generations.

Second on the list Musk has been at the forefront of a revolt against the fossil fuels and petroleum industries, with his disruptive inventions determined to use more sustainable energy sources such as electricity and solar power. Meanwhile, deGrasse Tyson has repeatedly spoken out against climate change deniers to warn of the threats facing life on Earth.

Swedish climate activist Greta Thunberg came in fifth, becoming the first female on the list and youngest to make the cut at 17 years of age. Despite becoming Time magazine’s Person of the Year for 2019, Thunberg has the fewest followers of any celebrity in the top ten with a Twitter account, with four million followers – nine million fewer than Neil deGrasse Tyson’s 13.2 million.

Hollywood celebrities Leonardo DiCaprio (6th), Oprah Winfrey (7th), Emma Watson (8th) and Emma Thompson (10th) also featured, each of them having stepped back from their acting and presenting roles to take on philanthropic projects.

Since winning a long-awaited Academy Award for his role in The Revenant, Leonardo DiCaprio has released two climate-focused documentaries, in search of solutions to slow down or put a stop to the climate crisis.

Emma Watson has become an advocate for green fashion, checking the sustainability credentials of every aspect of her 2019 Vogue photoshoot. Oprah has similar clout in the US to David Attenborough in the UK, having done the US voiceover for many of the recent nature documentaries he has fronted for a British audience.

Rounding out the list at number nine was former US president Barack Obama, with a whopping 112 million Twitter followers. Since leaving the Oval Office, Obama has continued to campaign for swift and decisive measures to act on climate change. His efforts have meant nearly half of survey takers think the 44th president still has the sway to change the way people treat the Earth three years since leaving office.