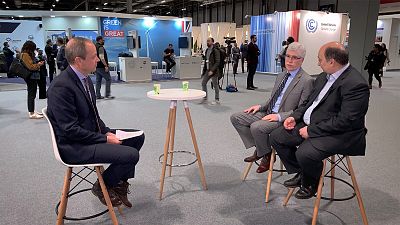 This year is likely to be one of the warmest on record. Our planet has seen unprecedented heatwaves and wildfires, accelerated melting of ice caps and glaciers, and CO2 levels reaching their highest levels in three million years.

Climate Now travelled to the COP25 climate negotiations in Madrid to discuss the figures with scientists.

To begin, we have the latest climate data for November from the Copernicus Climate Change Service, which shows that last month was 1.3 degrees warmer than the pre-industrial era.

It was significantly wetter than average in parts of Europe, with heavy rainfall and flooding in Italy and the Balkans. However, in Norway and around the Black Sea region it was drier than average last month.

On the other side of the globe, in south-east Australia, there was continuing warm and dry springtime weather, with soil moisture lower than average for the time of year, creating favourable conditions for the ongoing wildfires there.

There were many extremes in 2019, with the 'polar vortex' over north America at the start of the year bringing extreme low temperatures of minus 30 degrees Celsius, and then a heatwave across Europe that produced a new record of 46 degrees Celsius in France.

"The surprise is that it's no surprise," says Vincent-Henri Peuch, the Director of the Copernicus Atmosphere Monitoring Service. "Year upon year records get broken, and to some extent we get used to that. But if we take a little step back, very likely the last five years will be the five hottest years on record, the last 10 years will be the 10 hottest years on record.

"All these record-breaking temperatures, not by point one degree but by two degrees, three degrees in some areas, that's uncharted territory for the Earth," says Peuch.

The outlook in the very long term is rather bleak, with Maxx Dilley, Director of Climate Prediction and Adaptation from the World Meterological Organisation, highlighting concerns for sea level rise.

"The last time the Earth was this warm, the sea level was six to nine metres above what they currently are," Dilley told Euronews.

"So by the time the planet reaches a new equilibrium the sea level will continue to rise, the ice will continue to melt. And you can just think about all of these highly populated coastal areas what a six to nine metre sea level rise would mean for the populations there."

The COP25 summit sees many politicians, activists and other leaders calling for drastic cuts in emissions. However, in 2018 humans emitted a record amount of CO2 into the atmosphere, with another 33 gigatonnes of gas coming from energy-related activity.

"There is a credibility gap," says Glen Peters, Research Director at the Centre for International Climate Research. "Our emissions have been rising for decades, and that rate of increase doesn't seem to slow down that much. Emissions have gone up about 60% since 1990. Even since the Paris Agreement was adopted in 2015 emissions have gone up something like 4 per cent.

"So there's a real gap between where emissions are going, the ambition, and the political rhetoric," he tells Euronews.

Joeri Rogelj, a climate scientist at Imperial College London and IPCC report co-author, says the consequences of all this extra CO2 in the atmosphere are serious.

"The physical science on this is well established and really simple," he said. "Every tonne of CO2 that we put into the atmosphere adds to additional warming. So every year that we continue to emit into the atmosphere we add warming, we add risks, and we contribute to ocean acidification."

The climate campaigners at COP25 consistently ask politicians to listen to scientists on this topic. But Rogelj is not convinced.

"In 2015 they decided in Paris that they want to keep warming well below 2 degrees, at 1.5. Now scientists are saying what the implications are of that. The implications are rapid emissions reductions, net zero, so no further emissions into the atmosphere, by mid-century or shortly thereafter," he says.

"If emissions are going up again this year then this is clearly not on track with what science says," Rogelj concluded.