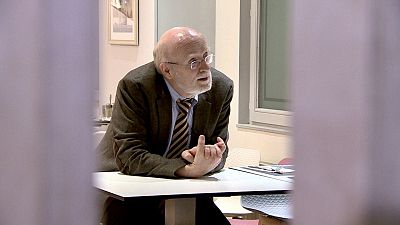 Hans-Otto Pörtner, a co-author of the IPCC Special Report on the Ocean and Cryosphere in a Changing Climate, talked to Euronews about the future for small island states with ongoing climate change.

“Small islands will be challenged, especially those in the tropics, and there are two main reasons — one is the demise of warm water corals and coral reefs, and the second one is the sea level rise,” he says.

“Even with ambitious climate mitigation we can not prevent global warming to remain much below +1.5ºC. At this global mean surface temperature, 70%-90% percent of all warm water coral reefs are going to disappear, and even more at +2ºC — the number projected is up to 99%. In many of these Small Island Developing States depend on those systems for protein supply, for fisheries, small scale fisheries — and these resources will go away, because with the dying reefs, the biodiversity will disappear.

Our special report for the first time specifically mentions the risk that some of these small island developing states would disappear from the surface of the planet.

“So this is one of the key challenges. The second challenge is sea level rise. If we are lucky, we can keep the sea level rise over the centuries to stay below one metre, which is already an existential threat to some of these small island states. And they may have to take appropriate adaptation measures, and their capacity for adaptation is limited, and we will need to be balancing between staying behind it and making a huge effort to kind of raise the surface level of the island artificially — some states like the Maldives are already doing that.

“But for some places — at least for some low lying coasts there — a retreat may be the better option. It could happen regionally, if the small island state has enough reserves, or there would be an international retreat. And our special report on the oceans and cryosphere in a changing climate for the first time specifically mentions the risk that some of these small island developing states would disappear from the surface of the planet.”