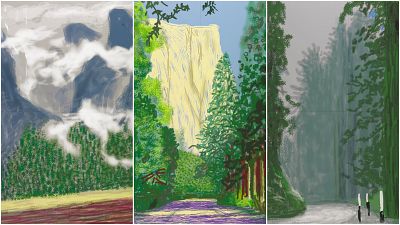 Celebrated photographer and artist David Hockney it set to unveil a brand new exhibition in collaboration with indigenous Americans of California’s Yosemite Valley.

Hockney’s 24 iPad-drawn renderings of the Yosemite National Park are to be exhibited alongside California basketry pieces, woven by Miwok and Mono Lake Paiute women in Arizona’s Heard Museum.

Nine artists including Lucy Telles, Carrie Bethel and Tina Charlie have baskets featured among the 20 examples on display.

Bringing Hockney’s drawings from visits in 2010-2011, his photographic collages from the 1980s and the mid-century baskets together demonstrated the “the shared inspiration and connection point” the Yosemite Valley region provided artists of different eras and genres, said the museum.

“The exhibition highlights the impact that Yosemite has had over time and space on artistic production, from the Valley's original Indigenous inhabitants to one of today's most influential working artists,” it added in a statement.

It also illustrated how technology had been used in art from the sophisticated technology and techniques used in basket weaving, to the technological development of the iPad. Meanwhile, it was curated by the museum’s director of research, Ann Marshall, and fine arts curator, Erin Joyce, with the intention of highlighting how Indigenous and non-Indigenous artists interpret the landscape through visual culture and fine art..

David Hockney's Yosemite and Masters of California Basketry exhibition is due to open its doors on 28 October.