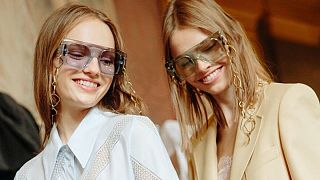 Projected across the walls of the Palais Garnier were images of mating animals, a striking backdrop for Stella McCartney’s Summer 2020 collection.

The ready-to-wear offering features a mixture of fitted styles paired with oversized shapes and a delicate palette of summer pastels. Looking to her origins as a designer, the collection also reimagined a classic McCartney piece, the power suit. True to the brand’s enduring style, the show had an air of classic, timeless shapes, colours and patterns meant to embody the designer’s feeling that the wild trends synonymous with fashion week should be left in the past.

McCartney confirmed that 75% of the collection was made from zero impact fabrics like Econyl and recycled polyester. The remaining fabrics were mostly organic cotton or upcycled denim. The announcement that this is the most sustainable season ever for Stella McCartney comes as the brand annoucnes its new Koba faux fur, an alternative to existing non-degradable plastic options. Worn by Russian model Natalia Vodianova to the Paris show, this faux fur is made from a corn byproduct blended with recycled polyester.

The clothing wasn’t the only indication of Stella McCartney’s dedication to sustainability, however. Instead of a press release with details of the collection under each chair was an “Eco-Manifesto” with a timeline that detailed the brand’s dedication to promoting ecological awareness over the last 20 years. The pamphlet also challenged “the fashion industry every day to be better, questioning things as they are and driving change”. Although not explicitly named, the designer invoked climate activist Greta Thunberg writing “the younger generation are standing up and telling us that our house is on fire”.

This will be the designer’s first presentation after joining French luxury group, LVMH, a move that may seem at odds with its unnamed inspiration after the CEO’s recent comments about Thunberg. The transition finalises the end of McCartney’s partnership with Kering, owners of Gucci, Yves Saint Laurent and Balenciaga, which led to the founding of the groundbreaking vegetarian luxury brand.

On announcing the partnership, Bernard Arnault, Chairman and CEO of LVMH, said that he hoped it was “the beginning of a beautiful story together” emphasizing the long-term potential of the house. “A decisive factor was that she was the first to put sustainability and ethical issues on the front stage, very early on”, he added.

Despite criticism of the youth activist, LVMH has made commitments to improving sustainability in the last few years. A partnership with UNESCO back in March saw the fashion giant commit to preserving biodiversity through the Man and Biosphere (MAB) project.

The collaboration still raises questions as to whether McCartney can continue to help change LVMH from within. After taking full ownership of the fashion house in 2018, a lot of companies approach her wishing to invest but the founder chose the group headed by Arnault because of his apparent “passion and commitment” to Stella McCartney as a brand.