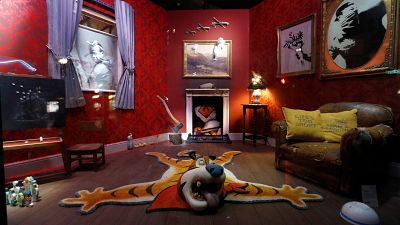 Original artworks by British artist Banksy form part of an installation inside a shop front, ahead of an online sale, in Croydon, Britain   -   Copyright  REUTERS/Peter Nicholls
By Rosie Frost  •  Updated: 02/10/2019

A surprise Banksy installation has appeared in Croydon, South London in a previously disused shop front. Emblazoned with the name “Gross Domestic Product™” the pop-up shop is made up of a number of window displays filled with the artists work.

Some of the works on display include a screen with part of an artwork titled “Season’s Greetings” which appeared on a garage in Port Talbot, Wales last Christmas. The satirical mural depicts a child catching snow on his tongue, snow which is actually ash from a skip fire.

Also part of the installation is a stab vest worn by British rapper Stormzy at Glastonbury this year for a set in which the musician made some striking statements about the injustice of the British justice system.

A statement taped to the store says “GDP is the homewares brand from Banksy and this is our first and only store”. The artist reveals that he will be opening an online shop in response to legal action from “a greeting cards company” who are trying to take ownership of the name Banksy in order to sell their own products.

According to this statement, prices in the store will start from £10 with all products handmade in the UK using existing or recycled materials wherever possible.

Croydon cabinet member for culture leisure and sport, councillor Oliver Lewis told Euronews Living, “This is fantastic for Croydon. The great thing about street art is that it’s for everyone and Croydon has one of the largest collections in Europe”. He added that it was great that Banksy wanted to add to this collection.

The surprise launch of this shop comes just before the auction of Banksy’s “Devolved Parlaiment” painting that depicts the UK parliament with chimps in the place of politicians. On public display between 28 September and October 3 at Southeby’s auction house in London, the painting is expected to fetch between £1.5 and 2 million.