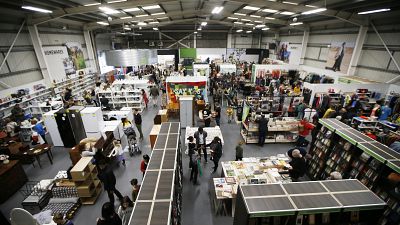 This giant warehouse of secondhand clothing, 12 times the size of the average Oxfam shop, has been opened by the charity in Oxford.

As part of Second Hand September, Oxfam has been looking at ways to encourage shoppers to move away from fast fashion toward a more circular approach. Sustainable fashion experts, WRAP, found that extending the active life of all clothing by just nine months would reduce the water, waste and carbon footprints of UK fashion by 20-30% each.

Oxfam itself, as part of consumer research carried out for their campaign, found that more than two tonnes of clothing are bought each year with 11 million garments ending up in landfill each year.

Buying secondhand might just be the answer to this incredible waste. Danny Sriskandarajah, Chief executive of Oxfam GB, said in a press release that "buying second-hand clothes helps to slow the ferocious fast fashion cycle, giving garments a second lease of life. With #SecondHandSeptember, we are sending a clear message to the clothing industry that we don’t want to buy clothes that harm our planet and the people in it."

The Chief executive called the new superstore a "treasure trove" and hoped that it would become a "destination shopping experience".

At its opening on Saturday, there were queues to be the first to enter and snap up a thrifty bargain. Julie Neeve, project manager for the superstore said "'It was an amazing day and a great atmosphere. Around 50 people were queuing to get in before the store opened, and it remained busy all day".

Designer items on offer included Gucci shoes, a Moschino belt and a Michael Kors bag. The store also has furniture for sale including a design classic 1960s Ercol table for £700, less than half the price you might find it elsewhere.

Oxfam's designer donations that can be found online include Armani evening wear and Bottega Veneta handbags but the superstore offers a chance to try on some of these items and perhaps find something not yet added to their web store.

It is also hoped that the store will become a hub for learning about increasing the lifespan of your clothes. Up-cycling events are planned throughout September to help customers add some longevity to tired clothing items of clothing.

This pre-loved shopping experience comes with the added benefit that it supports Oxfam's charitable work. Buying clothing in the store funds the charities campaigns around the world which help to provide clean water and lifesaving supplies to people affected by natural disasters and wars.