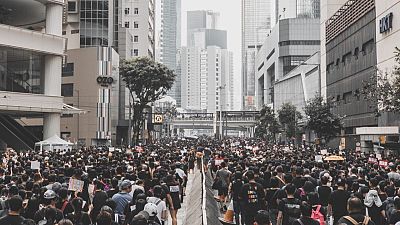 A furore sprung up in China this weekend in response to a t-shirt sold by fashion house Versace, which appeared to suggest Hong Kong and Macau were independent nations.

Both were formerly European colonies, which were returned to China in the 1990s and are now ‘special administrative regions’ that operate semi-autonomously of the Chinese state.

But currently, Hong Kong is in the midst of a series of protests against a bill that could see those accused of crimes extradited to China - seen as a threat to its democracy. After months of peaceful protesting, the Chinese government has stepped up its involvement this week, and battles with police have resulted in violence.

Amnesty International has decried the police brutality and arrest of protestors on vague charges. “Hong Kong police have once again used tear gas and rubber bullets in a way that have fallen short of international standards,” said Man-Kei Tam, director of Amnesty International Hong Kong, in a statement to the media. “Firing at retreating protesters in confined areas where they had little time to leave goes against the purported objective of dispersing a crowd.”

It was against this backdrop that Versace’s t-shirt, listing cities and countries in the style of concert merchandise featured locations such as Rio de Janeiro, Brazil; Dusseldorf, Germany and Beijing, China surfaced on social media. In addition to these cities, it also listed ‘Hong Kong, Hong Kong’ and ‘Macau, Macao’.

“They are perceived by the Chinese government as a significant and increasingly violent threat to its ‘One China’ policy,” Dr Andreas Behnke told Euronews Living. Behnke is a specialist in international political theory and author of The international politics of fashion: being fab in a dangerous world.

“While the protests started against a new law that was perceived as undermining the special status of Hong Kong; for the Beijing government [releasing such a garment] looks too much like a movement that denies its dogma,” he adds.

When the public got wind of this, it caused outrage on Chinese social media site Weibo. Users accused Versace of threatening China’s sovereignty and demanding an apology from Versace for ‘insulting’ Chinese people.

The brand duly capitulated, offering an official apology in which it said it had removed the t-shirts from sale and destroyed them. Meanwhile Donatella Versace took to Instagram to express her own regret over the “unfortunate error”.

“Never have I wanted to disrespect China’s National Sovereignty and this is why I wanted to personally apologize for such inaccuracy and for any distress that it might have caused,” she told followers in a post.

It came too late to repair all of the damage. Versace’s first and only brand ambassador to China, actress Yang Mi, had already quit.

'A crisis of their own making'

The whole debacle follows a familiar pattern. Coach, Givenchy and Swarovski have courted controversy with a host of similar faux pas in recent months. Coach produced a t-shirt that appeared to suggest Taiwan was a sovereign state. Such claims are in strict violation of the divisive ‘One China’ policy, which stipulates there is only one nation on Earth with ‘China’ in its name.

Given the controversy surrounding China’s sovereign territories, some have accused brands of protecting profits with their apologies. Those opposed to Chinese rule in Hong Kong vowed to boycott Versace, accusing it of kowtowing to an oppressive regime.

Outside fashion, airlines and hotel chains have previously been forced make apologies to China failing to adhere to China’s territorial claims.

It’s hard to say whether the recent upswell of outrage towards fashion brands seen to disrespect China’s territorial claims has been manufactured by the state, says Behnke. “But as part of the social credit system in China, it is an easy and convenient way to gain some points on that account."

Ultimately, this is yet another example of fashion reflecting the wider political climate. And perhaps of brands failing to learn from their peers. Dolce & Gabbana is still being blacklisted in China after a series of “racist” ads last year depicted Chinese women in what were described as outdated and stereotypical scenarios.

As Behnke puts it: “To list Macao and Hong Kong as independent entities is guaranteed to elicit responses from the Chinese government and social media. So this is a crisis of their own making, much like other recent examples of cultural or racial insensitivity.”