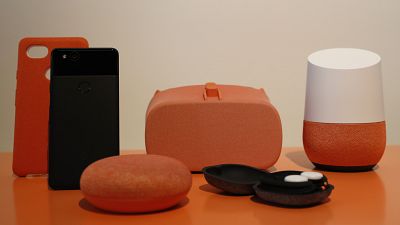 In an official blog post yesterday, Google’s Head of Sustainability in Consumer Hardware, Anna Meegan, announced three eco promises the tech giant is undertaking from here on in. The goal is to create less e-waste and accelerate both its sustainable and ethical commitments over a period of three years, by 2022.

Google isn’t just a search engine nowadays. The tech behemoth produces thousands of hardware products every year, including the Pixel phone, Pixelbook and the hands-free Google Home smart speaker, much like Amazon’s very own ‘Alexa.’ As such, the hardware is the focus of the announcement, as Google pledges to make more eco-friendly devices out of recycled materials.

“We’re always working to do more, faster. But today we’re laying the foundation for what we believe will be a way of doing business that commits to building better products better.”

How big is the problem of e-waste?

In 2015, the UN warned of a potential "tsunami" of e-waste to come, with detrimental hazards to both people and the environment due to elements found in the electronic equipment. Then in a report conducted just two years later, the UN found that worldwide, nearly 45 million tons of electronic waste was disposed of in 2016. 6.3 million tons came solely from the US (14% globally), where Google is headquartered at the famous Googleplex in Mountain View, California. Statistics showed that only 20% of this e-waste was recycled, leaving 80% to be sent to landfill.

According to the World Economic Forum only this year, one of the most positive changes in recent years has been the formation of various global agencies challenging the e-waste problem. Whether it's the International Telecommunication Union (ITU), the International Labour Organization (ILO) or the United Nations Environment Programme (UNEP), organisations have come together to join an E-waste Coalition.

What are the 3 changes Google will implement and what do they mean?

Firstly, Google has revealed that by 2020, 100% of all shipments going to/from customers will be carbon neutral. According the United Parcel Service (UPS) a carbon neutral shipment means that the sender (in this case, Google) has offset the climate impact of the shipping, by choosing to support an environmental initiative such as reforestation or funding for solar panels. Shipping pollution is a serious problem; according to Oceana, if global shipping were a country, it would be the sixth largest producer of greenhouse gas emissions. Just the United States, China, Russia, India and Japan emit more carbon dioxide than the world’s shipping fleet.

The next commitment Google is making is, by 2022, all hardware products will be made principally from recycled materials, with the ambition to maximise recycled content wherever possible. Google has not yet specified the materials it will be using, but these could include repurposed plastic, as Fast company predicts. Google has already produced the Google Nest product portfolio (a series of home products like smoke detectors, security systems and smart doorbells) from post-consumer recycled plastic, according to Anna Meegan. Another possibility is that products will be made from old electronic devices in recycled forms, much like similar tech competitors. Tech companies like Dell collect e-waste from countries all around the world to recycle them into new models, so Google's new initiative could be similar.

Lastly, from an ethical perspective, Google is planning to expand accessibility to its technology, by putting people first. What does this mean? The tech giant promises to improve the lives of those suffering with various disabilities, for example paralysis. It aims to achieve this through products such as Google Home Mini, which acts as an aid for people through voice command, hands-free technology. For example, turning down the thermostat at home, or playing music, helping those with paralysis to gain more independence.

What about Google’s track record on the environment?

Questions were raised in 2018 after an article by Bob Eccles on Forbes looked into Alphabet Inc’s transparency as a whole. At the time, Alphabet, otherwise known as the parent company of Google, was accused of a lack of reporting across issues like data privacy, data security and climate change. Eccles' article described Google's discussion of environmental, social, and governance issues as "scattered across several PDF documents" and "hard to find" due to a "paucity of information."

However, by and large, the tech giant is considered to be an environmentally responsible corporation, when compared to other tech companies of a similar size. According to the lengthy sustainability section of its website, 100% renewable energy was reached throughout global operations in 2017, a Google data centre uses 50% less energy than a typical data centre and it is transparent about a responsible supply chain. Equally, Google headquarters are known for being ecologically focused, while Google cafes boast recipes made from ‘ugly produce’.