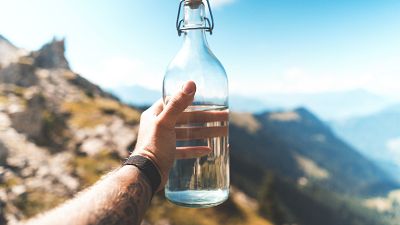 Still using plastic water bottles? Plastic-lined coffee cups or drinking straws? If so, it’s time to have a re-think and become more conscious of your own plastic footprint on the planet. Today is National Refill Day in the UK, an ‘action day’ designed to make you do just that, by raising awareness around the issue of plastic pollution in our oceans and encouraging us all to use reusable bottles on the go.

Why is refilling so important?

So today, Wednesday June 19th, we are asking whether you’ve “got the bottle” to stop plastic pollution by switching from a single-use plastic bottle to a reusable one as part of National Refill Day. If you’re thirsty, just fill up for free in the over 20,000 friendly Refill Stations around the country – using the location based ‘Refill app’ or by looking for the designated sticker in shops, cafés and business windows.

The campaign kicked off in Manchester, on June 1st, for the launch of Refill Manchester and then toured around with an interactive billboard asking the public to refill their bottles and ‘free the fish.’ The group then arrived in Birmingham on 5th June for World Environment Day and ended up in Canary Wharf in London today, for National Refill Day. To celebrate, some of the UK’s busiest Network Rail stations, like Manchester, Birmingham and London Victoria, also have dedicated teams to direct people to new water fountains for refilling.

The Refill family now has support from high street chains including Wetherspoons, Morrisons, Starbucks, Pret and Planet Organic, so look out for the refill stations on your next visit.