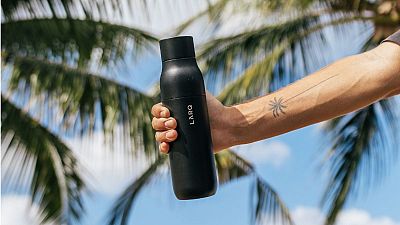 A brand claiming to solve the problem of smelly reusable water bottles is set to launch in the UK today.

The Larq bottle, which raised US$1.7m during a Kickstarter campaign, is self-cleaning. It uses UV lighting to obliterate 99.9% of odour-causing bacteria and viruses.

Its UV light technology, tucked away in the bottle cap activates every two hours in self-cleaning mode, basking the water and the inner surface in purifying UV light. The company says the tech should eradicate complaints commonly associated with reusable bottes, such as lack of access to clean water.

“Larq’s proprietary UV-C LED technology is integrated into a beautifully designed product that delivers pure water from a self-cleaning bottle, and directly addresses these complaints.”

The £95 bottle, which launches in Selfridges this weekend, also claims to keep drinks warm for up to 12 hours and cold for up to 24 hours, due to its vacuum-sealed cap and double-walled stainless steel exterior.

It comes with a USB adaptor to recharge the UV light, but could go up to a month on a single charge. The UK will be the second country the Larq bottle launches in, following its debut in the US at the end of last year.

The bottle is available in five colours, while the company has committed to donating 1% of its proceeds to benefit various charities that strive to make clean drinking water more accessible and omit plastic pollution, through its partnership with 1% for the Planet.