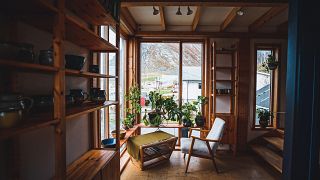 Lots has been going on in the environmental world this week in Europe. There has been major change in the luxury fashion industry in France as both LVMH and Kering fashion giants pledge to become more sustainable in future. A record was broken as one man decided to make the deepest dive ever chronicled, to the depths of the Pacific Ocean in the Mariana Trench. The descent was conducted in a submarine and found numerous remnants of plastic lying miles and miles below sea level on the seafloor. Photo London opened with a bang as Josh Haner exhibited Carbon’s Casualties, a worldwide documentation of the effects of climate change.

We think it’s important for you to read news from a whole host of different sources, to enrich your knowledge of our planet and increase sustainability awareness.

So here are the best long-reads from around the web this week:

Not milking it: how vegan cheese finally caught up with modern appetites

A fascinating feature about a tiny gourmet food shop in Brooklyn, New York, offering a whole range of cheese alternatives such as Feta and jalapeno cream cheese. But what are they made from and can suppliers keep up with the ever-increasing demand for vegan substitutes?

Is coral gardening the front line in the fight against climate change?

Underwater ghost towns exist deep in the depths of the sea. Sarah Frias-Torres comes up with a unique way of bringing them back to life, after witnessing a barren reef on her first ever scuba dive.

The UK Is Lagging Behind Nordic Countries On Happiness, It's Official

What makes Scandinavians so happy? Is it their minimalist interiors, their cinnamon buns? Read on for more, including an interesting section on the Swedish, Danish and Norwegian term ‘Friluftsliv’ which is all about spending time with nature.

The week in wildlife – in pictures

Exactly what it says on the tin. This beautiful array of photos of this week in wildlife is guaranteed to brighten your weekend. Explore bobcats, a Burmese python and a baby elephant frolicking in their natural habitats.