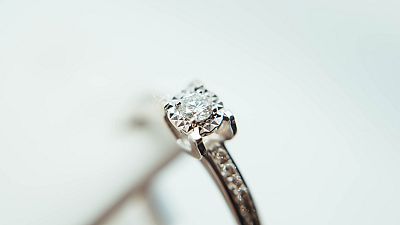 There's no need to compromise on chic if you're looking for an eco-friendly wedding or engagement ring. Here, we talk to top ethical jewellers Ingle & Rhode about how to find the perfect jewel to say 'I do.'

The hard decision has already been made; you’ve found the right person and are all set to to marry. And yet after making that monumental choice, a clutter of other choices spring up and need addressing, not least about the type and style of engagement or wedding ring to wear for - hopefully - the rest of your life.

Should the ring be a diamond? A classic design or something more modern? The choices can feel endless but whether it’s a timeless piece or a cutting edge jewel, there are ethically-produced styles to cater for everyone.

With a growing number of jewellers putting stock in sustainability, the options are broadening, even in the diamond trade which has been marred for the unethical practices some traders employ.

Ethical jeweller Tim Ingle, the co-founder and director of Ingle & Rhode who specialise in wedding and engagement rings, is keen to address some of the key issues in the diamond industry, starting with ‘blood diamonds.’

“‘Blood diamonds’ are those which are mined in war-torn countries where conflict is often funded by the diamond trade,” he says.

“Here, diamonds signify worker exploitation and atrocious human rights abuses rather than romance and commitment. Diamond miners are some of the poorest people on the planet and work in extremely dangerous conditions.

“Not only this, but diamond mining has taken a huge toll on the environment across Africa and other parts of the world. In Angola, mining has led to deforestation, soil erosion, and the relocation of local people. Elsewhere, wildlife has vanished, mines have been abandoned and the landscape is desolate after years of irresponsible exploitation.”

Knowing this, the best way to be sure your sparkler comes guilt-free is to spend time finding a jeweller whose principles are in tune with yours and who will take the time to discuss the stone.

One thing to be aware of is that while many jewellers call their diamonds “Kimberley-certified’ - that is they carry the Kimberley Process Certification (KPCS) which was introduced to eradicate the trade in conflict diamonds - bear in mind that some stones produced in conflict zones are still being smuggled into KPCS zones to be certified.

A jeweller who truly values the ethics of their products and their certification should be able to trace their stones back to their source.

“If your jeweller cannot trace a precious stone back to its source, you cannot be certain that it is conflict-free,” says Tim. “Kimberley Process Certification is not enough.” And knowing the source of the diamond doesn’t just verify its conflict-free status; it also means that you can be assured the stone has been cut and polished in an ethically sound manner.

“Despite being conflict-free, many diamonds and other precious stones are still cut and polished in sweatshop conditions, often by children, for well below the minimum wage,” he says.

“Make sure your jeweller knows your stone’s source, so that you can be sure it has been cut and polished according to strict guidelines.” While the jewel itself might initially grab your attention, take time to consider the band too. If the ring is certified Fairtrade gold it means that the workers in the mine received a Fairtrade minimum price for their gold.

“As well as a the minimum price, workers also have premium to spend on improving their businesses or on community projects, such as education, clean water and healthcare,” says Tim.

At the moment, there’s no Fairtrade scheme for platinum rings but some jewellers are thinking smartly about how they use the material. “Ask your jeweller if they can offer recycled platinum,” says Tim. “Recycled platinum is indistinguishable from new metal but greatly reduces demand on mines, thereby lessening the impact of unethical mining practices.”

Lastly, find out where the piece has been made.

“Most of the jewellery bought in the UK has been manufactured in countries in Asia,” says Tim, who only uses UK-based designers.

“This is a cost-saving approach for businesses here, but comes at the expense of working conditions and pay, as well as the quality of the finished ring. The best jewellery is not made this way.

“Your jeweller should be able to tell you exactly where your jewellery was made, and ideally the names of the craftsmen and women who created it.”