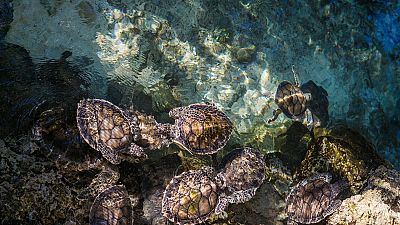 If you're a fan of eco-conscious adventure holidays and love helping animals but still can't resist the pull of a stunning island with pristine shores and translucent aquamarine waters, put Filicudi on your bucket list.

The most remote and wildest isle of Sicily’s Aeolian archipelago is one of Italy’s best kept secrets. And it's not just because of the beauty of its extinct craters dotted with fluorescent green prickly pears and flowery capers, the solitary pebble stone inlets accessible only by foot and the crumbly cottages that dot the silent hills covered in a lush, jungle-like vegetation.

In Pecorini a Mare, the only fishermen village on the island with bright low-cut houses and picturesque taverns, there's a tiny hospital ran by volunteers set-up to heal loggerheads caught in fishermen's hooks, nets, floating rubbish and wounded by boat engines. So don’t be surprised if after a lavish sea urchin spaghetti dinner and a glass of sweet Malvasia wine digestive you come across a white thatched hut where tiny pools of sea water host recovering turtles after they've been rescued at sea.

The turtle emergency center offers first aid in curing wounded flippers and extracting plastic bits from turtle bellies and throats before the animal chokes or dies of a stomach obstruction. You don't need to be a vet or a biologist, even tourists can volunteer as turtle doctors and nurses. The only thing you do need, apart from your love for loggerheads, is a strong stomach. Assisting while a fish hook is being taken out of a beak is not pleasant, especially since you can just imagine how much these poor animals are suffering.

When I had my first turtle-nursing experience I almost fainted. The animal's throat was cut open to release a hook which had gotten stuck, but by the end of the operation I was mad at how reckless human actions can put at stake the life of many sea animals.

The rehab ER focuses also on spreading awareness on the perils at sea loggerheads face each day due to the crazy behaviour of man, blind to the delicate marine ecosystem he is destroying. This is where the fun blends with sharpening knowledge and respect for the sea: you’ll be helping turtles all the while working on your tan, splashing in the water and exploring secluded beaches or hidden trekking routes leading to spectacular coves once roamed by pirates.

Turtle baby-sitting ‘blue’ weeks are offered to involve holiday-makers, with accommodation in cozy village dwellings close to the hospital. There are daily tasks that come with the rescue mission.

Volunteers, alongside experts, patrol twice a day the isle’s shores on fast-speed dinghies to monitor potential turtle presence and encourage tourists to send an SOS if they spot any out at sea and in difficulty, or floating dead.

Guided boat tours inside Filicudi's amazing network of grottos and funny-shaped sea stacks turn into helpful environmental lessons on how even a single plastic bag or candy wrap dropped at sea by weekend yachts is poison and can endanger the survival of not just one single turtle, but of a whole species.

Snorkeling and scuba diving sessions with qualified guides offer insight into the multifarious underworld life. Filicudi's still intact marine microcosm is also home to dolphins and other cetaceans, which can often be spotted jumping out of the water during whale-watching day trips.

Italy was once the temple of caretta caretta, like of the monk seal, both of which are now nearing extinction. But Filicudi, thanks to its remoteness and peacefulness, remains a safe haven for many marine creatures which have picked it as their hideaway. The isle’s caves and stratified volcanic seabed layers are ideal habitats.

The most exciting part of the turtle baby-sitting holiday is when a healed loggerhead is thrown back into the sea amid the applauses and cheers of enthusiastic volunteers. Many can’t resist the urge to dive from the dinghy into the water wearing a mask to say good-bye and watch the turtle swim away into the deep blue.