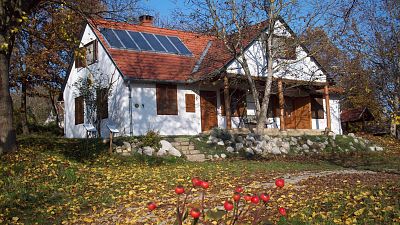 Somewhere about 32km. away from the ancient Hungarian city of Pécs is a tiny village called Dinnyeberki. If you didn’t know about it, you’d drive right past the barely noticeable gravel path just off the left side of the main road. Most people do without ever finding out about the idyllic eco-village of Gyűrűfű that is situated atop a gently rolling hill, overlooking a traditional Hungarian landscape that consists of a sweeping valley bordered by thick forest – all set to a soundtrack of never-ending bird song and horses’ happy neighs.

In the early 1990’s two like-minded people who didn’t just want to think about environmental awareness but also actually do something about it came up with the idea of founding an eco-village. Hungary’s first eco-village started as a summer camp and soon, spread over 175 hectares of land once owned by the local agricultural coop. A few different sites had been considered but this one had its own watershed and relatively few regulatory barriers to be acquired.

Initially, four families moved to Gyűrűfű after it was established and today, only two people from the first “settlers” still live here. At the moment there are about 30 people living in the eco-village. One of the families is István Fridrich and Éva Hevér. István is a computer engineer who moved here in 1993 from Szekesfehervar (a city of 100,000 people) and now runs a guest house, teaches horseback riding and has a small IT company.

“You only realize that you want to live here once you’re here. It’s a different process for everyone. Things that helped me make the decision were memories like cutting hey with my grandfather when I was a child or wanting to do the pentathlon, thus having horses is important. You contemplate it for a while and at some point you confront the decision: you’re in or you’re out. And I had this dream – I wouldn’t be able to say why – to live somewhere out on a farm or at a watermill and at some point it turned out that there were others that also wanted to live in this way, that it’s not such a unique idea to live life more to the fullest,” István explains.

Life back in the city is unimaginable for István because of the structure and the rules that come along with it, something that is very different when living in an eco-village. Institutions still influence the eco-village life because Gyűrűfű is not a republic of its own so villagers cannot extract themselves from the outside world completely but, nonetheless, the local municipality does not govern the village and they have their own decision-making process that has evolved over the past 30 years.

One of the trickiest decisions is how to allow a new person or family to join the eco-village.

“Of course, we first ask the person what they can make a living from, how they want to build a house and to accept the principles of the community. In the past there was a six-month trial period and only then the community made a decision to accept the person or not. Nowadays it's not so strict because it is too difficult but nevertheless some time must be spent in the community both for our protection and the person’s protection. In the experience of the last 28 years, the villagers’ opinions have proved to be very reliable in this respect,” István says.

The foundations of Gyűrűfű are rooted in permaculture, a way of life that is designed to ensure harmony between nature and agriculture and provide as much self-sufficiency as possible. There are small sub-units within the village according to topographical needs and common interests, you can only do organic farming here, when constructing your house fiberglass or asbestos cannot be used and the water table is protected. All houses must be in harmony with the traditional architectural style of this part of Hungary and many of them get a large part of their energy supply from solar panels.

An average day for the villagers is never the same.

“I always have to multi-task. Some days I’m teaching horseback riding, then out in the field with the tractor, then doing house repairs – no two days are ever the same. Weather plays a big role in deciding what to do on a particular day,” István says.

“There are no holidays or breaks, you always have to take care of the goats and milk them at the exact same time in the mornings and in the evenings,” explains András, who moved to Gyűrűfű 20 years ago with his wife and now runs a goat cheese farm as well as goat cheese-making courses.

Éva, István’s second wife, is a relatively new addition to the eco-village. For almost three decades she was a flight attendant for Malev, Hungary’s former national airline that ceased operation in 2012. Then she completed her second degree and went on to teach English and other languages for some years at a language school. She met István four years ago and, eventually, decided to see if she had what it takes to live in Gyűrűfű.

“It was a difficult decision for me to leave my home in the suburbs of Budapest and at first it was very strange having to get used to a different life style. Here in the eco-village I do all kinds of things: I run the guesthouse, keep contact with clients and guests, give classes, etc. I even became a horseback riding instructor – something I never thought I would do! I enjoy life here and can definitely see myself here for the next 10-20 years. Of course, as István and I get older we may need to move back to the city but no one really knows what the future has in store. In the meantime, I enjoy having my two-year old grand daughter visiting us here quite frequently – she even calls me the ‘horse grandma’,” Éva says.

Gyűrűfű lies within Hungary’s largest contiguous protected area – the Danube-Drava National Park – so there is no shortage of ways to enjoy the special beauty of the country’s southwest. Éva and István have a guesthouse, which István built with his own hands, where city dwellers can come to relax and get away from the daily grind of urban life. The more adventurous visitors can also stay in one of the yurts or even sleep on haystacks next to the horses in the stables.

“We try to offer a mix of modern comfort and old traditions but, of course, sometimes water can be limited and so on. We hope that visitors leave Gyűrűfű with a better sense of and connection to nature, as well as a firm intention to live in a more sustainable way,” Éva explains.

They often receive groups of children from primary and secondary schools, and even university students. Apart from enjoying all the fresh air, the youngsters attend the “wood school” where they learn about living sustainably and how to make things with their own hands. István is a professional horseback rider, instructor and all around admirer of these majestic creatures. There are 7 horses in Lovastanya in Gyűrűfű where visitors can also take riding lessons. Deer sightings out on horseback riding trips are almost guaranteed and one time, István and Éva saw a herd of some 120 deer.

Other activities include hiking, bird watching, stargazing (the areas boasts extremely low light pollution levels), archery and enjoying locally made jams, whatever is in season in the vegetable garden, honey from the village beekeeper and cheese from the eco-village’s goat cheese farm.

Lászlo, a university professor, used to visit Gyűrűfű with his family every summer when his children were young and now brings his Sustainable Development class here every year to teach them about living within the planetary bounds.

“After about 3-4 days in Gyűrűfű, away from ‘civilization’, you reach a lower level of intensity and then when you go back to your normal city life, the first 1-2 days can be quite strange and intense,” Lászlo explains.

Experiencing life at an eco-village is important for anyone who wants to find a solution to the man-made environmental problems we are currently facing.

“The world would be poorer without eco-villages. They are not THE answer but they are an answer for certain people. We need these beautiful experiments of ten or more families living together sustainably, effectively making decisions and then teaching world leaders about effective decision-making,” says Boglarka, a PHD student at the Central European University researching eco-villages from all around the world.