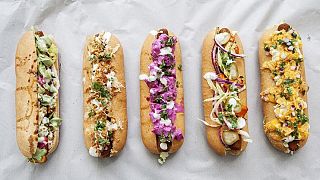 Where would you set a plant-based vegan food truck park? Probably Berlin, Los Angeles or London, right. Well, none of these location were bold enough for Márton Nagy and his friend and business partner, Péter Papp. No, the duo decided to establish their gastronomical vegan adventure in Hungary, a country where meat comes with a side of meat and is simply a cornerstone of every meal. Their **‘Vegan Garden**’ found a home in the heart of Budapest’s Jewish District, putting the Hungarian capital on the map of European vegan hotspots.

Márton Nagy worked in the pharmaceutical industry before making the switch to hospitality. He first managed a bar where questions about the impact of western lifestyles on the environment started popping up. What if you could use non-toxic paints and art made of recycled trash to decorate the place whilst serving drinks in paper cups sourced from sustainably managed forests? Returning from a five month backpacking trip around South East Asia, his decision was made. He would invest his time and energy in creating a truly unique food experience with sustainability in mind.

Péter Papp had already a background in the food and drink industry having run a vegan burger food truck. As fate would have it, Péter Papp approached Márton Nagy with an original idea: to create the first plant-based food truck yard in Hungary (and potentially the world). And so they did, last summer. “The idea came not only from our desire to protect animals but also to promote health and sustainability” Márton Nagy said.

The launch was a success. Now in its second edition, Vegan Garden is due to reopen in March. The concept is simple: six street-food trucks are parked in one single location. From thin-crust pizza and dairy-free ice cream, to Mexican inspired meatless chili and juicy burgers, the choice of plant-based tasty comfort food is abundant. This hub also hosts dedicated markets to sample ingredients and replicate the delicacies at home.

Rácskert bar, a veteran of Budapest’s bar scene, is still here but it focuses now on a sustainable lifestyle: recyclable glasses are made of plant material and all drinks are also vegan. Food waste is delivered to the nearby Kisdiófa community garden, with facilities for composting.

Although Budapest’s vegan scene has begun to flourish, Márton Nagy was pleasantly surprised by the warm welcome. “We found a great location in the centre of the city and that’s definitely part of our success. It also comes down to the amazing word of mouth that was generated in the first season. We didn’t spend much on social media advertising so I guess we created a place that people were really waiting for.” Márton concludes.