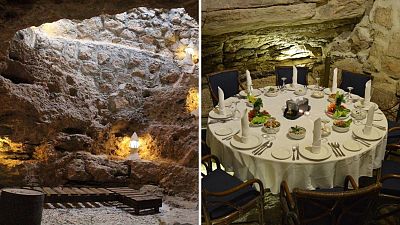 How do you get people interested in caves and their history?

One Jordanian geophysicist came up with a creative idea of transforming a 60 million-year-old cave into a fashionable restaurant.

George Haddadin said the whole idea came when a coincidence led him into a hidden cave at a plot of land he inherited from his father in his hometown of Madaba, Jordan.

This neighbourhood on the west side of the city has many natural caverns that have evolved over millennia. Even though he had planned to build a house for his family on this land, as a geophysicist Mr Haddadin changed his mind and decided to find a way to attract people to come and visit the cave. There was one problem only. He did not believe that Jordanians would visit a museum in a cave.

"I had the idea to serve food and drinks," he said. And this is how the idea of opening the Mrah Salameh restaurant came to his mind. "Mrah means vast area and Salameh was after the name of my late father," he added.

Click on the video above to see the approximately 60 million-year-old cave turned into a tourist attraction.

New York restaurant lets diners fish for their own supper