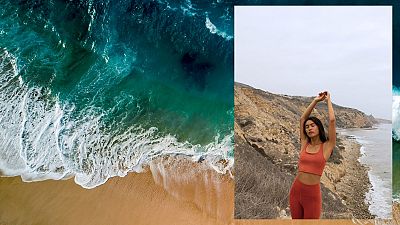 Ghost fishing nets, which are lost and left in the ocean, make up 10 per cent of plastic waste in the sea and these nets take about 600 years to decompose. Aquafil, one of the main producers of nylon 6 in Italy and the world, collaborates with Healthy Seas and Ghost Fishing to recruit volunteer divers and collect these fishing nets. The goal? To recycle the nets and transform them into new textiles. Something they have been doing since 2011.

The company calls this regenerated nylon fibre material, ECONYL®. The fabric is part of a closed loop production cycle: it’s woven entirely from found waste and is, in turn, 100 percent regenerable. A recent mission took place in the Aeolian Islands and led to 4000kg of discarded fishing nets being brought to the surface. As more and more brands get on board - Levi Strauss Co., Speedo, Volcom were pioneers - and use ECONYL® in their designs without necessarily telling consumers about it, we decided it was time for a round up of our favourite ones.

Husband-and-wife duo, Quang and Ellie, set out to make a change after she could not find eco-friendly activewear. Together they founded Girlfriend Collective back in 2016 with the objective to offer 100 per cent green and chic athleisure wear that wouldn't compromise on performance. Their first product - a pair of black legging made with 25 recycled water bottles - was given away for free to curious customers around the world. Today, the brand's collection also includes tops and bras in a variety of shades, and is one of the best 'value for money' out there.

Designer brand Gucci was one of the first luxury houses to use ECONYL® in their men outerwear last year. In its Gucci Equilibrium - a platform highlighting the brand's work to bring positive changes to the fashion industry - the label details publicly its commitment to not use PVC and the switch from virgin to recycled plastic, which started in 2015.

Following the notorious standards for sustainability set up by Kering (the luxury group Gucci is a part of), the positive actions also includes the use of an engineered fabric made from post-consumer bottles, responsible gold from artisanal small-scale miners and recycled metals in their accessories.

One season after making his debut at London Fashion Week last year, the Irish-born 26-year-old designer, Richard Malone revealed the most eco-friendly collection of all. He worked with silk from Italian manufacturer Taroni, chosen for their responsible use of water and acid-free colors, and fabrics that could have been confused with synthetics but were in fact, ECONYL®. As for the bags complementing the looks, they were also environmentally conscious and made in collaboration with Freitag that rely on used truck tarpaulins, discarded bicycle inner tubes and car seat belts as the basic material for their accessories.

Artisanal Italian brand Repainted’s collection are handmade in Italy and uses 100 per cent ECONYL® yarn. Maxi dresses, playsuits, and bikinis inspired by Art Nouveau architecture are designed to last longer than regular materials and resist chlorine, sea salt and sunscreen. The patterns of the ss-2018 collection are re-interpretation of details seen in the streets of European cities Vienna, Nancy, Valencia, Colonia, Vichy, and Taormina.

The latest addition to Adidas' collection is a swimwear range made with Econyl® fabric in partnership with Parley and represented by French ambassador, Coralie Balmy, the former Olympic 200 m freestyle world record holder and marine biologist.