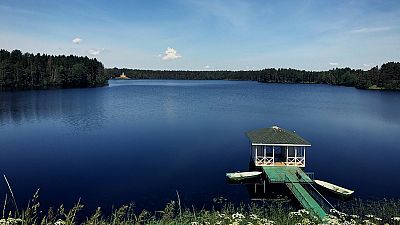 Last summer was my third time back in my parents’ home country and what must have been their hundredth. Nonetheless, together, we embarked on a journey that none of us had done before and knew existed. Visiting secluded islands hiding monasteries and old settlements is not what comes to mind when booking a summer trip to Russia. And at first, a week-long river cruise seemed to me less appealing than the excitement of Moscow. I was mistaken.

Our journey started in Saint Petersburg, where we spent two days before boarding the cruise that would ride the Svir River until Onega Lake and onto the White Lake, then following the Volga River through the Moscow canal, and ending in the capital city a week after.

First, we stopped at Valaam Island to visit a fourteenth-century monastery complex, which light-blue dome was hidden amidst the lush green forest and only reachable by hike. Still active, it is permanently inhabited by a few hundred monks and families. The Valaam chant, that combines both Byzantine and Znamenny singing, is sung by the male choir on-site. They regularly tour the world to raise money for monastery restorations and listening to their melancholic acapella performance in the church is an experience I highly recommend.

Back on the boat, we enjoyed the view of the River Svir from the deck until we reached our next stop: Svirstroy. Here, yet another secluded monastery stood on a still and dark-blue lake. Two small boats docked below looked like toys resting on stained glass. How smooth and undisturbed life seemed in this humble monk home.

After a tour of the monastery and a taste of fresh local honey, we continued our journey to Mandrogi. There, we watched craftsmen in huts constructing various antique Russian toys and traditional instruments, carving wood and sewing intricate patterns. We also passed by the local vodka museum, which offered tastings of some 250 different varieties.

We arrived at Kizhi Island, home to the iconic Kizhi Ensemble, a collection of historic wood Orthodox churches that were built in the 18th century, using only interlocking wood logs without any nails. The churches are now part of the Kizhi State Open-Air Museum of History, Architecture, and Ethnography, a Unesco World Heritage Site. Russia’s oldest standing wooden church (1391), Cha­pel of the Resurrection of Lazarus, also stands here.

Though some structures are under restoration, they are still accessible to visitors. A guided tour took us around the small island’s huts and windmills, with demonstrations on farming, harvesting and boat-building. Once more, we were in awe of how simple life was, how isolated though not lonely. Everything was in harmony and at peace.

Next, we went to Myshkin, the name of which comes from the Russian word for “mouse” (“myshka”). Legend has it that once upon a time, a prince lay sleeping on the bank of the river when he was awakened by a mouse running over his face. Cursing the mouse, he noticed that it had actually saved him from a nearby snake that was approaching, ready to bite. He ordered a chapel to be built on the site, and years later, the town of Myshkin rose around it.

Despite a population of just 6000, it is still a hit with tourists. Probably because of its Mouse Museum that puts on an entertaining dress-up skit inside a “mouse castle” that showcases hundreds of mice figures made of different art materials from around the world. Nearby, the Valenki Museum exhibits a wide range of traditional Russian warm felt boots available for purchase.

Our last stop before Moscow was Uglich. Built along the Volga River, Uglich features a horizon carpeted with colorful churches. It was here that Ivan the Terrible’s 10-year-old son Dmitry was found murdered under mysterious circumstances. On this site stands the hauntingly beautiful Church of St. Dimitry on Blood. Listening to the alleged story of how the body of the boy was found sent chills through us all, standing where it happened in that very spot four centuries earlier.

In today’s tense global political climate, it can be hard to grasp and appreciate the rich life that thrives in Russia, especially since a great part of its cultural heritage is hidden away. But sitting on the deck under the sun, slowly gliding down still, vast rivers and visiting centuries-old Orthodox churches was a brilliant way to do so.