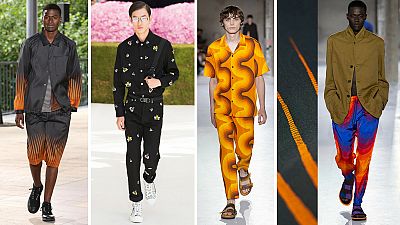 “Sun everywhere” is the theme of Issey Miyake Men’s latest collection and it’s blazing. Inspired by the desire for light and of “light-ness”, it proposes a casual, yet refined shirt style, expressing sun streaming and shadows on textured textiles. Stripes, shorts, and a touch of flames to light up the night.

With light comes shade, a motif the japanese designer wanted hand-dyed by artisans in Kyoto, which holds many ancient dye-houses.

The heatwave hit Acne’s runway hard too. Shirtless models nonchalantly wearing fouta towel-like trenches is everything we need next summer.

Casual streetwear is forever a trend and the very parisian label Basscoutur knows how to re-interpret the aesthetic. Inspired by the eco- responsible concept of upcycling, Basscoutur questions the notion of clothing's timelessness whilst respecting the environment and the era. It twists the obvious and revisits the pieces and their material to grant them a new lease of life. Made in France and in the Mediterranean region, the entirety of its pieces is sellable thanks to the important stock of recycle fabrics and vintage pieces. Since 2008, Riad Trabelsi - founder and artistic director of Basscoutur - has been activating this idea of recycling, re-using, and re-interpreting classics.

In 2016 he was joined by Lenny Guerrier, finalist for the ANDAM Young Creation prize in 2017 and winner of the Maison Mode Méditerranée prize in 2017.

The very French Dior Homme collaborated with Kaws, one of America’s most famous artist. The designer reinterpred the emblematic Dior bee in charm form and created a stuffed toy version of his BFF character that stood 10 meters tall and covered in ten of thousands of flowers in the center of the runway.

Transparency was also a very important theme in the Dior Men Summer 2019 collection. It offers a subtly sensual window on the body and a way to see existing elements in a new light. Finally, flowers were the star of the show –and they have been an inescapably central element of the Dior identity from the very first day. Kim Jone’s very awaited debut show also included another immortal House signature, the cannage motif, which gets woven into chunky sneakers, and laser-cut bags.

But the most awaited debut show of them all was Virgil Abloh’s Louis Vuitton collection. Off White’s founder invited all of his very famous friends at the Palais Royal gardens to present his monochromatic clothes. Kid Cudi, A$ap Nast, Playboi Carti and more walked down a runway which featured the pride rainbow spectrum. History was made.