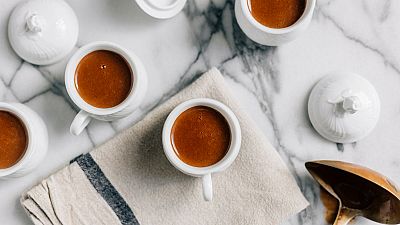 "Coffee happened in my life by mistake. I wasn’t a coffee but a tea and wine drinker. I would even find the taste of coffee a little bit...bitter”, says Amir Gehl smiling. How ironic for this London-based entrepreneur, turned coffee guru and supplier of the best tables in the capital, including La Dame de Pic at the Four Seasons, Harry’s bar and Mark’s Club in Mayfair and 67 Pall Mall where we meet to talk about his thriving business.

“One day, my wife bought an espresso machine and I started experimenting different capsules, which I thought tasted a lot better than the coffee we used to drink in fancy restaurants” he explains. A trip to Harrods where a barista introduces him to Kona coffee, a high-end specialty from Hawaii worth £200 per kilo, springs the ultimate idea: what if he could combine the best coffees in the world and the convenience of drinking them from a capsule. Difference Coffee was born.

“Capsules keep coffee fresh that’s why a Nespresso will always taste good. After being roasted, coffee loses its taste through oxidation very quickly” says Gehl. “If you are a coffee shop and serves hundreds of cups per day you don’t need capsules but if you are a Michelin-starred restaurant serving a few clients per day, than you definitely need them”. This fact is the foundation of Gehl’s venture: to curate the “ultimate terroir-led coffee collection”, but where could he find the best coffees in the world?

Coffee competitions and auctions: grading the best coffee beans in the world

Coffee competitions happen all around the world awarding crops from the main coffee producing regions (Jamaica, Guatemala, Hawaii, Brazil, Nicaragua, Costa Rica,...). The auctions following the results attract buyers internationally and the precious winning beans can reach up 1600$ (€1300) for one kilo (La Hacienda Esmeralda in Panama for example) or more.

The Cup of Excellence, a nonprofit, global membership organization born in 1999, is one of the main competitions, and aim at discovering and rewarding exceptional quality coffee farmers. Each competition sees an average of 300 entries and 9,000 analyzed cups.

Aroma, flavor, aftertaste,... are thoroughly studied in order to rate the coffee. To win Cup of Excellence and be considered “specialty grade” (opposed to “commercial grade”), a coffee needs to score 86 out of 100. Only 1% of all the coffee produced in the world manages to do so.

A selection of the best (and most expensive coffees) in the world, sold in capsules

“Last year, only 24 farms managed to score 86 in Brazil. Fazenda Santa Barbara was the winner and they produced exactly 510 kilos of this coffee. The production was split into 2 lots during the auction. The first lot went to Japan and the second one, well, we won it” says Gehl. “Today, we are the largest supplier of coffee coming out of “Cup of Excellence. We bought lot number 1 from El Salvador, Honduras, Nicaragua, Costa Rica, Burundi, Guatemala… We basically bought all the best coffees in the world.” he adds.

Difference Coffee collection currently includes Kona from Hawaii (his personal favourite), Blue Mountain from Jamaica, Geisha from Panama, Kopi Luwak from Indonesia,... To the connoisseur all of these names are associated with pleasure and excellence, but I had to ask, what makes these coffees special and how can the average consumer, such as myself, recognize a good cup of coffee.

Choosing your coffee: filter or espresso?

“There are three elements to consider” says Amir Gehl. “First, the temperature. High elevation brings cooler climates, which creates slower growing cherries (in which the coffee beans are found). These will be bigger and develop more sugar and acids.” he describes.

“Then the roasting process is very important. When we buy coffee, we buy grain that looks like peas. It takes up to 16 minutes to roast them and this is similar to making popcorn. But having the best ingredients is not enough. Like in a restaurant, you also need a good chef. I work with Johnny England, who is one the four licensed coffee (Q) Graders in Europe” he says.

“Finally, it’s about how you make it: with pressure to obtain an Espresso that is very strong and less aromatic, or without pressure through a filter which is a slow extraction and will bring out the taste. There is more caffeine in the latter, contrary to popular belief” he sums up.

The cherry of top of the coffee tree is that in this particular high-end trade, 100% of the money raised during the auction goes directly to the farmer. Generally in this industry, coffee farmers grow the cherries, pick and sell them for around 3$ (€2,40) a kilo. All the fruits from different farms are combined and the consumer doesn’t know from which estate the coffee comes from. Most farmers actually don’t even see or taste coffee.

“When Difference Coffee pay $300 (€240) for one kilo, it goes directly to that particular farm.” says Ghel proudly. In the end, when a regular Nespresso capsule cost 30p, a Difference Coffee one cost an average of £3, “which would still be cheaper than buying a cup of coffee from a high-street coffee shop chain” he concludes.