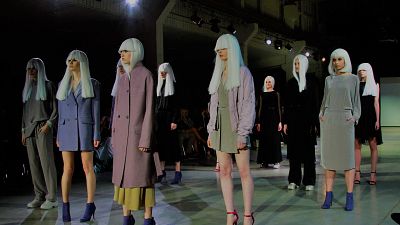 “Either you like it or hate it, but nobody in Riga is indifferent to it”, explained our tour guide as we began our visit of the National Library of Latvia. Comparing it to Sydney Opera House and other “oddly shaped buildings” around the world, this particular one was clearly made to be a “landmark”, she said. Strategically located on the bank of the Daugava river, the Library offers a panoramic view over the other touristic points of the city making it the perfect start to a journey through Latvian style and design.

The building, also known as Gaismas Pils - the Castle of Light - was designed by Latvian American architect Gunnar Birkerts and opened on 28 August 2014. Its evident modernity on the outside is a symbol of a new era for the three Baltic states (Latvia, Lithuania and Estonia), which democratically broke free from Soviet occupation in 1991. Whilst on the inside, the Library keeps the collective memory of Latvia and its traditions that are, for the most part, enclosed in the Dainas - the country’s folk songs, kept in a special cabinet.

Although the country has strong roots and many rituals inlaid in its national literature, Latvia is relatively young. Along with Lithuania, Estonia and Finland, these Northern European countries celebrate the centenary of their independence in 2018, earned after the end of the first World War when German and Russian occupancy ceased. Now, members of the European Union and the eurozone, they are slowly building their own path in which the capital cities play a crucial role.

Riga, Latvia’s capital, is located a the heart of these developments thanks to its ideal geographical position at the center of the Baltics. Being the largest city of the region, it is a natural hub for culture, design and fashion players to meet and thrive. The fine dining scene includes experiences such as wine and food pairing by the best sommelier of Europe 2017 and local fashion is growing thanks to initiatives such as Riga Fashion Week taking over the city.

Riga Fashion Week: bridging style and design in the Baltics

Riga fashion Week is the most important event for the fashion industry in the region. It showcases a handful of local inspiring designers such as Latvian labels Talented and Public Makes Image. The later was held last night in a villa in the center of town, gaining most of the attention. This urban lifestyle brand founded in 2016 draws from 80’s glamour (vinyl and faux-fur) and combine it with construction workwear essentials (baggy pants, denim overalls, a danger warning sign) in a playful way that was fresh, sexy and vibrant.

On a softer side, the show LYLI by Lithuanian designer Lilija Larionova revealed inside architecture space Riseba won the international audience with its delicate dresses in beige and grey shades. The Autumn Winter collections 2018 featured sheer fabrics flowing on tall models wearing wigs of white long hair, matching their pale skin. It was eerie and dark at the same time, and very wearable.

Local designs made in Latvia, Lithuania and Estonia

As most of fashion conversations today always shift towards sustainability and ethical practices - two topics we are very keen on as you know if you are a frequent Living it reader - it’s quite remarkable to witness the emergence of this particular fashion scene in which all the brands are both designed and made locally. A rarity in today's world.

Visiting BOLD concept store, which stands for Best Of Local Design, we were introduced to brands such as Rebellionaires from Estonia. This unisex athleisure brand designed for the youth, the longboard riders and the young at heart, collaborates with independent designers to create these unique prints in eccentric and colourful patterns, applied to backpacks and leggings.

From Couture (Atis Artemjevs) to Japanese inspired minimalist labels (Deeply Personal, Keta Gutmane) and relaxed urban wear (Kult by BOLD), homewear and swimwear (SLOW), this concept store is a one stop shop to make in the Latvian capital. Specially during Fashion Week when designers are available to talk you through their collection and inspirations.